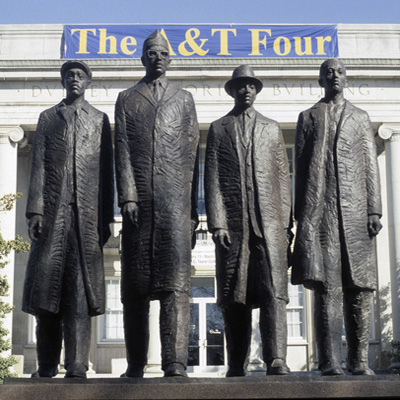 Description: This monument provides a larger-than-life portrayal of Jibreel Khazan (then known as Ezell Blair Jr.), Franklin McCain, Joseph McNeil and David Richmond, four NC A&T students who became known as the "Greensboro Four" for their sit-in at Woolworth's department store in 1960. The figures are depicted walking out of Woolworth's after their protest. Located in front of NC A&T's Dudley Building, the statue took more than 6,000 pounds of clay to create and stands fifteen feet tall. NC A&T Chancellor James Renick proposed the idea in 2001.

Front: FEBRUARY 1 / These four A&T Freshmen envisioned and carried out the lunch counter sit-in / of February 1, 1960 in downtown Greensboro. Their courageous act against /
social injustice inspired similar progress across the nation and is remembered as /
a defining moment in the struggle for civil rights.

Subject notes: The "Greensboro Four" were four NC A&T freshmen who sat down at the lunch counter of Woolworth's department store on February 1, 1960. Woolworth's at that time was "standing-only" for African Americans. Their sit-in helped launch a wave of similar demonstrations across the country.