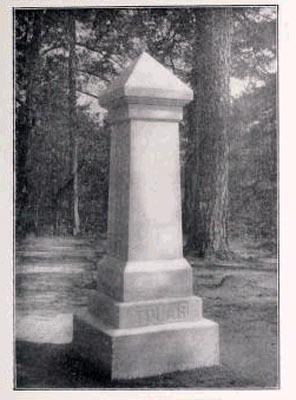 Description: This monument was dedicated to nine brothers of the Tolar family from Cumberland County who died as Confederate soldiers in the Civil War. The column is made of stone and tapers upward to a pyramidal cap. It sits on a three tier base. The front is inscribed with a dedication to the brothers, and the sides are inscribed with their names, regiments, and battles where they died.

Inscription:
Front, on column: In Memory of / Nine Tolar Brothers / Sons of / ROBERT & FRANCES TOLAR / All Born in Cumberland County, N.C. / All Volunteered in 1861. / They gave their best service / to this county / as Confederate Soldiers.


Front, on base: TOLAR

Subject notes: John Tolar dedicated the monument in 1913 in honor of his father, Captain William J. Tolar and his brothers, all who joined up with the Confederate army in 1861 and subsequently died in battle. John Tolar was the President of Tolar-Hart Cotton Mills in Fayetteville and at one time a businessman in New York City, as reported by Blanche Smith.

Location: The memorial sits in Cross Creek Cemetery near the Cumberland County Confederate Monument which is believed to be the first Confederate monument erected in North Carolina.