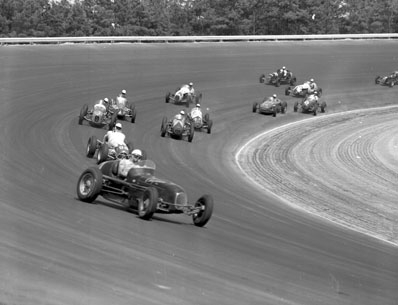 NASCAR's roots were laid in the southeastern United States, primarily in North Carolina. One reason for this involves the bright red clay of North Carolina’s Piedmont.  When properly treated (churned, graded, packed and watered correctly), the clay creates a very smooth and durable natural racing surface.

It has been said that the first stock race took place when the second car was built. It was only natural that thrill-seeking drivers with their high-performance machines would challenge each other to a race to see whose car was faster. These little matches led to more organized events, usually held on a quarter-mile or half-mile dirt track carved out of a farmer’s field. Soon it was realized that locals would pay good money to watch these races. Fences were erected and a ticket booth was built. Races were held on county and state fairgrounds tracks and became more popular as the years passed.

The earliest days of the sport involved enterprising Carolinians involved in the “untaxed adult beverage” business. The cars were usually pre-war Ford coupes with engines containing special parts that produced high speeds, a must if you were to outrun the government agents who were in pursuit of “whiskey trippers,” as they were known. Beating the agents meant you were able to run another day. If caught, you went to jail.

A former driver and part-time race promoter named Bill France realized how big racing could be if it was organized and had a uniform set of rules, meaning a car could race in any area of the country and still be within the rules. The sport needed a national point system and one official national champion. It also needed credibility--meaning guaranteed purses, and it needed cooperation among all sanctioning bodies. In December 1947, France summoned the sport’s best owners, drivers, mechanics and promoters to the Streamline Hotel in Daytona Beach, Florida for a four-day series of meetings (Fielden, 1987). The rules were drafted and cooperation among all attendees resulted in what we know as NASCAR, the National Association for Stock Car Auto Racing.

North Carolina was well represented in those meetings with Charlotte’s Buddy Shuman being elected as a driver’s representative to the Board of Directors. Mt Airy native Jimmy Cox was appointed to the Competition Committee. Alvin Hawkins from the Winston-Salem area was named flagman for the new organization along with a position on the Technical Committee (Rule Book, 1948). 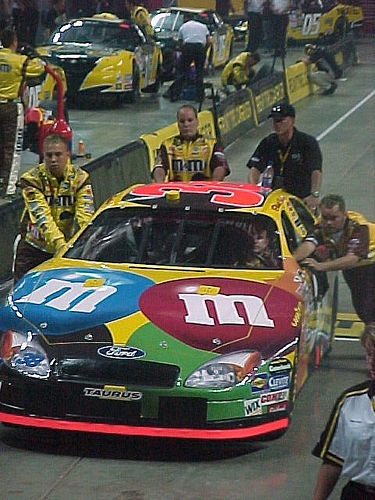 A total of 52 races, all on dirt tracks, were held in NASCAR’s inaugural 1948 season. North Carolina speedways hosted 30 of those events at places like Greensboro, North Wilkesboro, Lexington, Wadesboro, Hillsborough, Elkin, Winston-Salem and Charlotte.  The first Strictly Stock Division race, (now the NASCAR Sprint Cup Series), was held at Charlotte’s 3/4-mile dirt track in June 1949 (Year Book, 1950). North Carolina quickly became the center of the NASCAR world with its close proximity to the majority of the sports racing venues. The NASCAR Sprint Cup Series, the premier racing division, has produced 28 different national champions with nine of them hailing from North Carolina, more than any other state (Media Guide, 2010). Buck Baker, the first champion with back-to-back titles; Lee Petty, the first driver to win three championships; Richard Petty and Dale Earnhardt--with a series-high seven championships each and arguably the sport’s greatest legends, are all North Carolina natives.

From the earliest days it seems the best teams, drivers, and latest technology have come out of North Carolina. Ford Motor Co. established their official NASCAR racing team in the mid 1950s and located their facility in Charlotte and soon many of the sport’s biggest teams followed. Today nearly 90% of the teams competing in NASCAR’s top three series are based within a 90 mile radius of Charlotte, NC (Media Guide, 2010). NASCAR, although based in Daytona Beach, Fl., opened its new state of the art Research and Development (R&D) Center in Concord, N.C in 2003. Technology that is developed at the R&D Center is easily shared with the industry since the center is located near many of the team shops.

In 2005, the University of North Carolina-Charlotte, did a study of motorsports financial impact on the state. It found that the industry employed over 27,000 people with an average salary of $71,000 and a yearly contribution of 5.9 billion dollars to the state economy. Charlotte Motor Speedway alone has an impact of over 400 million dollars annually (Connaughton and Madsen, 2006).North Carolina’s role in stock car racing was a major factor in NASCAR selecting Charlotte as the home of the NASCAR Hall of Fame. Opened in May 2010, this 150,000-square-foot facility honors the history and heritage of NASCAR. The high-tech venue features artifacts and interactive exhibits designed to educate and entertain fans and non-fans. Each May five individuals are inducted into the Hall of Honor.

Resources in libraries on NASCAR [via WorldCat]