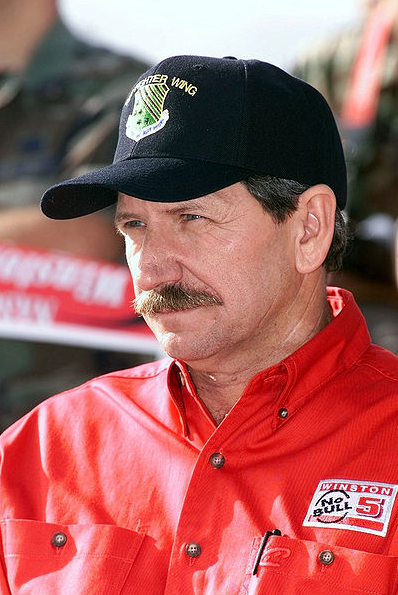 Dale Earnhardt was born on April 29, 1951, in Kannapolis (Cabarrus County). His father Ralph, a competitive and innovative driver on the NASCAR Modified, Sportsman and Grand National circuits, amassed 350 victories over a 23 year career. Dale followed in his father's footsteps, dropping out of school in ninth grade to pursue a career in racing.

Earnhardt made his stock car debut in 1975 in the World 600 at the Charlotte Motor Speedway, finishing 22nd. He drove sporadically, without a full-time sponsor, until 1979, when Richard Osterlund chose him as driver for his team. He won at Bristol in his 16th start, and went on to place in the top five in 11 races during the season. His performance was stellar enough to earn Rookie of the Year honors, and the following year he won the first of his seven Winston Cup Series titles (a feat equaled only by fellow North Carolinian Richard Petty).

Known for his aggressive driving style, and in consequence dubbed "The Intimidator," Earnhardt dominated the sport through the 1980's and early 1990's. In addition to his seven Winston Cups, he won three IROC championships, was twice named American Driver of the Year, and five times named the National Motorsports Press Association Driver of the Year.

Dale Earnhardt was killed in the final lap of the 2001 Daytona 500 on February 18, 2001, at the age of 49. His son, Dale Earnhardt Jr., has continued the racing tradition of the Earnhardt family.