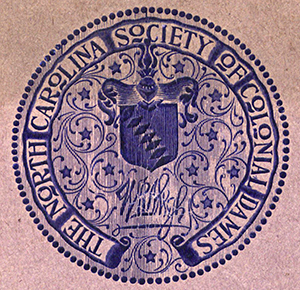 The National Society of the Colonial Dames of America in the State of North Carolina, formerly called the North Carolina Society of the Colonial Dames, was the fourteenth state society added to the national organization founded in 1891. Membership is for women of lineal descent from residents of the American colonies before 1750 who rendered service to their country before 5 July 1776, including the signers of the Declaration of Independence. Forty states have these societies.

The North Carolina Society of the Colonial Dames was organized in 1894. Florence Wilson Hill Kidder was the founder and first president of the organization. The charter members were all residents of Wilmington. During the first decade of the twentieth century, other areas of North Carolina organized their own county or town committees of the North Carolina Society of Colonial Dames. Early on, marking historic sites became a primary goal of the statewide group. Under the leadership of Luola Murchison Sprunt, president from 1906 to 1912, the Colonial Dames compiled a list of 77 important sites in North Carolina, an early attempt to designate or register such places. Bronze tablets and granite markers commemorating important historical events began to appear throughout the state.

Gabrielle Moore deRosset Waddell, a society officer for 39 years, served as president from 1916 to 1935. During her tenure, the society began to award medals, loans, grants, and scholarships to worthy students of North Carolina history. It also began to generously support the publication of scholarly books, essays, and research concerning the history of the state. A sampling of books that have been supported by the Colonial Dames include Journal of a Lady of Quality; Being the Narrative of a Journey from Scotland to the West Indies, North Carolina, and Portugal in the Years 1774 to 1776, by Janet Schaw (1921); a reprint of The Journal of Thomas Lawson-Gentleman (1936); The Early Architecture of North Carolina, by Thomas T. Waterman (1941); and The North Carolina Portrait Index, 1700-1860 (1963).

Other activities of the Society of Colonial Dames include war relief efforts during both of the world wars; help for the needy during the Great Depression; assistance to the Red Cross; support of libraries, museums, and night schools; nursing scholarships for Native American women; scholarships and loans for gifted college students; and support of various social services. Members of the North Carolina society also support the activities of the National Society of the Colonial Dames, including the preservation of Dumbarton House, the national headquarters located in Washington, D.C.

Frances Sutherland Lee, A History of The National Society of the Colonial Dames of America in the State of North Carolina, 1961-1994 (1994).

The National Society of the Colonial Dames of America in the State of North Carolina website: http://www.ncdames.org/