Mary Webb Nicholson was among the earliest women to be licensed as a pilot. Her license, from the U.S. Department of Commerce, is numbered 9562 and was granted Oct. 17, 1929. (She was not, however, the first North Carolina woman to be licensed. Rockingham County native Viola Gentry, preceded Nicholson by a year and a half. Gentry’s license, issued in Feb. 25, 1928, is numbered 1822.) 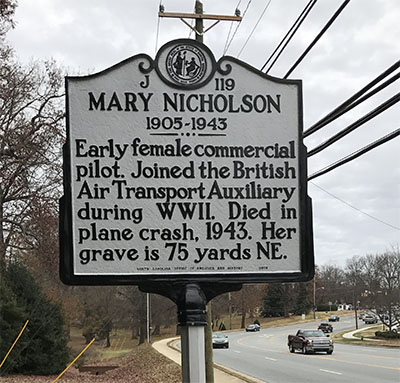 Nicholson, born in Greensboro in 1905, was among the state’s pioneers of aviation in the 1930s. While living in Ohio during a brief and unsuccessful marriage, she took flying lessons in exchange for office work and parachute dives to advertise the school. After her marriage dissolved in 1928, Nicholson returned to her family home in Greensboro. Although she never owned a plane, she flew whenever she could and always on New Year’s Day for luck.

On May 15, 1933, Nicholson earned a limited commercial pilot’s license and her transport license the following year, becoming the first woman in North Carolina to hold both. After teaching her brother how to fly she took on other students. She promoted women in aviation through her memberships in organizations and participation in air shows.

In 1937 Nicholson accepted famed aviatrix Jackie Cochran’s offer to become her personal secretary. Working with Cochrane gave Nicholson exciting opportunities to travel and attend national aviation-related events. It was through Cochran that Nicholson became one of twenty-five civilian women to join the British Air Transport Auxiliary unit during World War II to ferry military planes from factories to Royal Air Force bases, freeing up the military pilots for missions. Nicholson was based in Maidenhead, west of London, where she lived with a host family. She was thrilled to have the opportunity to fly professionally.

Nicholson was killed on May 22, 1943, a few miles west of Birmingham, England, when the plane she was ferrying developed an oil leak. The airplane’s motor froze and the propeller flew off. Nicholson was too close to the ground to parachute so she tried to land the plane in a small field, but she crashed into a stone barn.