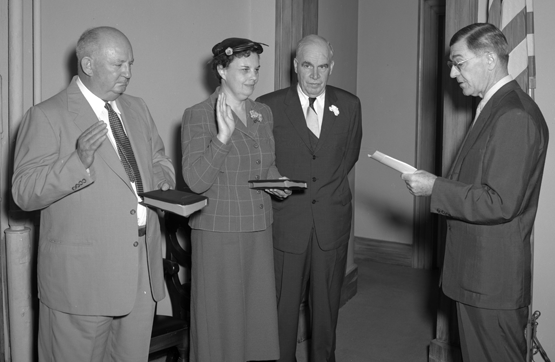 The North Carolina Rural Electrification Authority (NCREA) was created by the General Assembly in April 1935 to secure electric service for rural communities. Composed of six members appointed by the governor, the NCREA was empowered to survey needs of farm communities, assist communities in organizing "Electric Membership Corporations," help these organizations obtain financing, and assist privately owned power companies in extending service to rural areas or provide power to consumer-owned cooperatives. One month later, in May 1935, President Franklin D. Roosevelt, under authority of the Emergency Relief Administration, established the Rural Electrification Administration (REA), which acquired permanent status as a federal lending agency after passage of the REA Act in 1936.

In North Carolina, as in most of the other 14 states with rural electric agencies, controversy developed between the federal REA and the state organization. Critics in the 1930s, including Raleigh News and Observer editor Josephus Daniels, accused the NCREA of undermining the work of the federal agency and releasing information to private power companies before approving nonprofit farmer cooperatives. Private utilities were charged with constructing "spite lines" that "skimmed the cream" by providing power to the most densely populated section in a proposed cooperative's area, thereby thwarting formation of the cooperative.

Those who defended the NCREA cited the low percentage of rural electrification in 1935, the relative isolation of North Carolina farms, and the extent of rural poverty throughout the South. Conservative North Carolina politicians emphasized close cooperation with business interests while the federal agency relied on loans to membership cooperatives to achieve similar ends. Both the availability of federal REA loans and the work of the NCREA forced private utilities and municipalities to extend service to rural customers. Nevertheless, S. H. Hobbs, whose analysis of the NCREA was more favorable than many, acknowledged that the friction between the federal and state organizations "tended to retard rural electrification progress in North Carolina."

Operating under legislation last revised in 1979, the modern NCREA is part of the Department of Commerce. The governor appoints five board members for four-year terms and two staffers in the state office, including the state REA administrator, who serves as secretary to the board. Although electric and telephone service is generally available to all areas of the state, the NCREA continues to review and approve loan applications to the federal REA from electric membership corporations and telephone membership corporations who wish to increase their generating capacity or update their equipment. The NCREA hears complaints and reviews service of the 28 electric membership cooperatives and 9 telephone cooperatives operating in the state.

Members of the Rural Electrification Authority being sworn in. 1955. Call no. ConDev55-835A. Image from the State Archives of North Carolina.