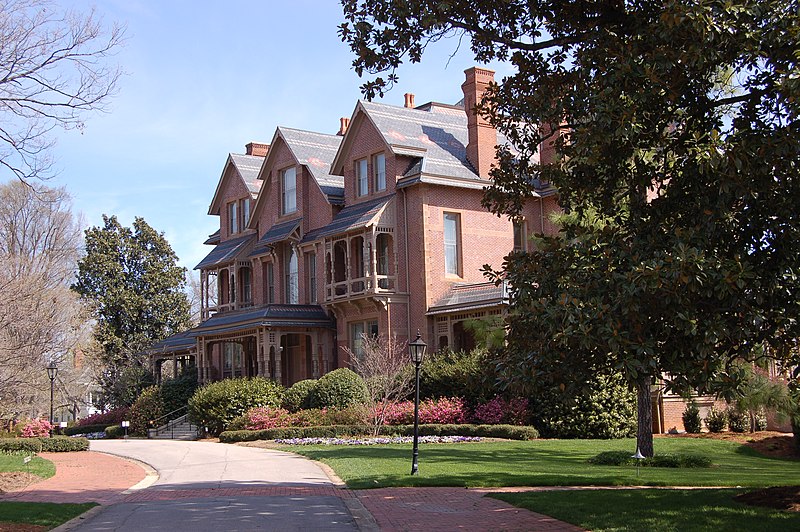 The office of governor in North Carolina has changed dramatically through the years, emerging from its practically powerless beginnings to a position of immense influence and authority. Ralph Lane, who led Sir Walter Raleigh's colony on Roanoke Island in 1585-86, was the first person to hold the position. Early colonial governors were appointed by the Lords Proprietors, then the Crown (after 1730), and generally did their bidding, maintaining little autonomy in decision-making. Following adoption of the first state constitution in 1776, the governor was elected by the General Assembly for a one-year term with the possibility of serving no more than three years in any six-year period. The office remained relatively weak compared to the legislature. A small increase in executive power occurred after the constitutional convention of 1835, which provided for election of the governor by the people every two years.

The North Carolina Constitution of 1868 increased the governor's term from two to four years and further expanded the office's duties and powers, including the ability to make appointments. Over the years, the governor began to gain more control over the state budget. The administration of Governor Cameron Morrison (1921-25) was instrumental in this development, and Governor O. Max Gardner (1929-33) added to Morrison's accomplishments. Serving during the Great Depression, Gardner oversaw such reforms as the creation of more appointed positions within the government and the reorganization of state agencies, the initiation of the Australian (secret) ballot in statewide elections, the establishment of workman's compensation, the assumption of state responsibility for maintaining public schools and roads, and the consolidation of the University of North Carolina System. Through Gardner's efforts, the office of governor became more powerful and central to the state's governmental system than ever before.

Under Governor Robert W. Scott (1969-73), North Carolina's government was again reorganized and altered in several important ways. Scott directed the adoption of the state's third constitution, which has been in effect since 1971. The document made few changes in the governor's role, although in 1977 the citizens voted to allow the governor and lieutenant governor to run for a second consecutive term. (James B. Hunt Jr. was the first governor elected consecutively, winning office in 1976 and 1980 and again in 1992 and 1996.)

Since the ratification of the new state constitution and the passing of the Executive Organization Act, both in 1971, the office of governor has been one of the 19 departments in the executive branch of state government. The Executive Organization Act charged the governor with preparing and submitting to the General Assembly a comprehensive and balanced budget, then, following enactment by the legislature, administering it. By the early 2000s, the governor was the state's chief executive officer, directing a multibillion-dollar enterprise with about 200,000 employees. The publicly elected members of the Council of State-consisting of the governor, lieutenant governor, attorney general, secretary of state, state treasurer, state auditor, superintendent of public instruction, and commissioners of labor, insurance, and agriculture-serve as the executive advisory board. The heads of the state's other executive departments-including the Departments of Administration, Commerce, Revenue, Correction, Crime Control and Public Safety, Cultural Resources, Environment and Natural Resources, Health and Human Services, and Transportation-are appointed by the governor. The office of state controller is also of primary importance to the work of the executive branch.

There are several principal administrative branches of the governor's office. The executive assistant oversees administrative operations, serves as the governor's link to cabinet members, advises the governor on legislative matters, and represents the governor in matters of state. The legal counsel monitors all legal issues relating to the governor and cabinet, advises the governor when policy developments involve legal issues, and investigates the merits of pardon and extradition requests and those of rewards and payments of legal fees charged by the state. The Office of Budget and Management directs preparation of the budget and advises the governor on policy decisions related to the biennial budget, legislative issues, and the management of state government. The Boards and Commissions Office reviews applications and submits recommendations for appointments to the governor for more than 350 statutory and nonstatutory boards and commissions controlled by the governor. It also researches qualifications and requirements, maintains records, and serves as a liaison with associations, agencies, and interested individuals and groups.

The Office of State Planning compiles and disseminates statistical data to promote sound public policy analysis, planning, and decision-making. As of the early 2000s, it included the Strategic Planning and Analysis Section, the State Data Center, the State Demographics Unit, the Center for Geographic Information and Analysis, the Community Resource Information System, and the North Carolina Geodetic Survey Section. The Press Office, whose principal official is the press secretary, serves as the voice of the governor's office, coordinating communications efforts (press releases, speeches, and public service announcements) for the administration. The Press Office also plans public events for the governor. The Office of Citizen Affairs works to make state government more responsive to North Carolinians, such as responding to complaints and helping citizens tackle problems with the help of state agencies.

The legislative counsel is responsible for establishing and maintaining a working relationship with members of the General Assembly on all legislative matters of importance to the governor. The Eastern Office (New Bern) and the Western Office (Asheville) serve as regional links between the governor and the residents of 33 eastern and 27 western counties. Finally, North Carolina's Washington, D.C., office is a liaison between the governor, the state's congressional delegation, federal agencies, and the president.

Through most of the state's history, the governor has not had the power to veto the legislation of the General Assembly. The ability to unilaterally block legislation through veto is a product of the constitutional tenet that bills require the signature of the chief executive to become law. Typically, a bill that is vetoed may become law if passed again with a special majority. In 1996 North Carolina became the last state in the Union to grant its governor the veto power. Previously, all bills passed by the legislature became law when signed by the presiding officers of both houses of the General Assembly.

The governor's specific duties and responsibilities are mandated by the state constitution and legislative statutes. They include directing all phases of the state budget, from initial preparation through execution; serving as commander in chief of the state militia; chairing the Council of State; convening special legislative sessions; faithfully executing the laws of the state; granting pardons, commuting prison sentences, and issuing extradition warrants; joining interstate compacts; reorganizing and consolidating state agencies under his or her direct control; exercising final authority over state expenditures and administering funds and loans from the federal government; and delivering the annual state-of-the-state address to a joint session of the legislature.

State of North Carolina, Office of the Governor website: http://www.governor.state.nc.us/