The second governor (after Richard Dobbs Spaight, Jr.) to follow his father into office, Robert W. (“Bob”) Scott (1929-2009 ) reorganized state government and restructured the state’s system of higher education. The heir to the Scott mantle was born on June 13, 1929 in the Haw River community of Alamance County, where his forebears had farmed and worshipped at Hawfields Presbyterian Church for generations. His grandfather, Robert W. (“Farmer Bob”) Scott, for whom he was named, served in the legislature. His father, Kerr Scott, served as state agriculture commissioner, U.S. senator, and governor from 1949 to 1953. Young Robert W. Scott attended Duke University and graduated from North Carolina State College in 1952. In 1951 he married Jessie Rae Osborne; they would have five children, one of whom, daughter Meg Scott Phipps, was elected Commissioner of Agriculture in 2000 (she resigned in 2003 and subsequently pleaded guilty to charges of extortion and conspiracy).

Robert W. Scott, upon graduation, returned home to manage his father’s dairy farm at Haw River. From 1953 to 1955 he was a special agent for the Counter Intelligence Corps of the U.S. Army and served in the Far East. At the end of his tour he returned to the farm just as he would throughout his political career. In 1961 Scott served as master of the State Grange. Governor Terry Sanford appointed him to serve on the State Board of Conservation and Development. In 1964 Scott was successful in his bid for lieutenant governor, his first elective office, and held that post, presiding over the state senate, during the governorship of Dan K. Moore. In the Democratic gubernatorial primary in 1968 Scott met J. Melville Broughton, Jr., son of the former governor, and Dr. Reginald Hawkins, the first African American to seek the office. Broughton declined to call for a runoff after Scott led the voting but failed to gain a majority in the primary. In the fall Scott defeated Congressman James C. (“Jim”) Gardner, the Republican nominee. In an additional irony of history, Hoyt Pat Taylor, Jr. was elected lieutenant governor in 1968. His father had served in that post from 1949 to 1953 while Kerr Scott was governor. 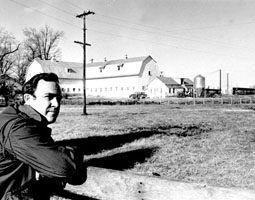 Like O. Max Gardner, governor from 1929 to 1933, Scott left his imprint principally through reorganization and consolidation of governmental functions. From 300-plus state agencies and offices Scott created seventeen cabinet-level departments, effectively changing the basic structure of the executive branch. Over strong opposition Scott championed the concept of a single governing board for the state’s institutions of higher education. In 1971 the legislature created the sixteen-campus University of North Carolina with a single president and thirty-two-member board of governors.

During Scott’s term North Carolina instituted a kindergarten program and increased vocational education in the high schools. The legislature increased taxes on gasoline, tobacco, and soft drinks to support highway construction and new programs. The governor placed an emphasis on planning and established the Council on State Goals and Policy and a system of multi-county planning regions toward that end. During his administration the Good Neighbor Council, an innovation of Governor Sanford, became the Human Relations Commission. The Citizens Committee on the Schools dealt with resolution of conflicts arising from court-ordered busing to achieve racial integration. Governor Scott deployed the National Guard and Highway Patrol to control unrest on college campuses. In national forums he supported President Richard M. Nixon’s concept of revenue sharing.

At the close of his term as governor Scott became vice-president of the N. C. Agribusiness Council. He co-chaired the Appalachian Regional Commission from 1977 to 1979. In 1980 he unsuccessfully challenged Governor James B. Hunt, Jr. in the Democratic primary for governor. From 1983 to 1994 he served as president of the state’s community college system. Scott’s governorship marked the end of the seventy-two-year Democratic monopoly on the office.

Powell, William Stevens. 1962. North Carolina lives; the Tar Heel who's who. A reference edition recording the biographies of contemporary leaders in North Carolina with special emphasis on their achievements in making it one of America's greatest States. Hopkinsville, Ky: Historical Record Association.

I was a bout to ask why it

This site has been very useful in my project thank you.

http://www.governor.state.nc.us/contact/governors/robertWalterScott.aspx Check it out next time get your own info!

Thank you for posting the link. Yes, we are familiar with governor profiles on the Governor's website. The authors of the profiles are historians in the Research Branch of the NC Office of Archives and History. They gave both of us permission to print them on both sites.