North Carolina has maintained a military force since the Revolutionary War. In 1877 its original militia was restructured into the North Carolina State Guard, headed by the adjutant general. This active militia consisted of volunteers who were regularly enlisted, uniformed, and equipped and could be called up at any time. During the Spanish-American War (1898), the State Guard was not subject to the president's call for troops, but the adjutant general supervised its reorganization to provide volunteers for the war effort. In 1903 the General Assembly changed the name of the State Guard to the National Guard in conformity with a 1903 act of Congress. 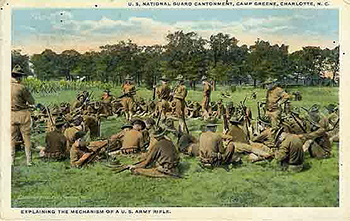 On 3 June 1916 the power to mobilize the guard shifted from the governor to the president, and the National Guard was sent to the Mexican border under the command of Gen. John J. Pershing. In August 1917, with the U.S. entry into World War I, National Guard units nationwide were drafted into federal service in preparation for combat duty overseas. North Carolina governor Thomas W. Bickett, recognizing the need for a home military force to maintain peace and order, issued a proclamation on 23 Sept. 1917 calling up 5,000 persons from the unorganized militia. (Only in Winston-Salem, where a lynching was threatened, were the services of these troops actually required.) On the return of the National Guardsmen, the reserve militia was disbanded in 1918.

Camp Glenn, located in Carteret County about three miles west of Morehead City, was the permanent site of the Annual Encampment of the North Carolina National Guard from 1911 until the end of World War I. Named for Governor Robert B. Glenn, the facility was transferred to the U.S. Navy in 1918 and expanded into a regular naval air station. The camp was then turned over to the Coast Guard and became operational on 24 Mar. 1920 as the first Coast Guard Air Station in the nation. Camp Glenn was again occupied by the North Carolina National Guard from 1921 to 1941, when the U.S. Navy purchased part of the land for use as a section base during the war.