The Spanish-American War, fought over Cuban independence and lasting less than six months in 1898, afforded North Carolinians a brief interlude in a period of intense political confrontations. In response to President William McKinley's call for troops following the sinking of the USS Maine on 15 Feb. 1898, North Carolina recruited two regiments of white troops and a third of black enlisted men and officers. North Carolina, Illinois, and Kansas were the only states to recruit all-black regiments for service. A number of problems plagued the 1st and 2nd North Carolina Regiments, including large numbers of desertions, medical discharges, low morale, oppressive heat, and a lack of training in loading, aiming, and firing rifles.

Raleigh's Camp Bryan Grimes was the training facility for the 1st North Carolina Regiment, the first state unit raised for the war. As that camp became crowded, the 2nd Regiment transferred to the North Carolina State Fairgrounds. On 18 May 1898 Col. W. H. S. Burgwyn of the 2nd Regiment announced that the new camp would be named Camp Dan Russell after the state's governor, Daniel Lindsay Russell. The regiment pitched tents on the grounds and made use of the existing fair buildings, holding dress parade in the enclosure inside the racetrack. The temporary camp served as a mobilization and training facility for North Carolina volunteers during the war. 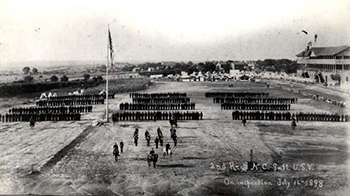 By early July half of the troops were sick and excused from duty. An outbreak of typhoid fever killed seven men and sent many to the camp hospital. Boredom, delays in pay, and a lack of sufficient uniforms and weapons contributed to morale and discipline problems at the post. Many men deserted, and wanted criminals appeared in the ranks, damaging the 2nd Regiment's reputation.

Since the 2nd Regiment left for new posts in Georgia and Florida in late July 1898, by 2 August only a surgeon, a chaplain, a few guards, and a handful of attendants remained in the camp hospital caring for 27 patients, some with typhoid fever. When the 2nd Regiment returned to Raleigh in September at the end of the war, they occupied Camp Bryan Grimes. By October 1898 the North Carolina State Fair had taken over the site of Camp Dan Russell.

The first three companies of the 3rd North Carolina Regiment-Companies A, B, and C, with approximately 380 men-were designated the Russell Black Battalion and arrived at Fort Macon (near Beaufort and Morehead City) on 30 May 1898. They established Camp Russell, a temporary encampment in close proximity to the fort. Seven additional companies of black volunteers arrived in early July, and on 19 July the ten companies were mustered into service as the 3rd Regiment of North Carolina.

On 14 Sept. 1898 the 3rd Regiment moved to Camp Poland near Knoxville, Tenn., remaining there until 21 November, when it proceeded to Camp Haskell near Macon, Ga., for winter encampment. At Macon, the Third passed in review before President McKinley on 21 December and was disbanded during the first week of February 1899. 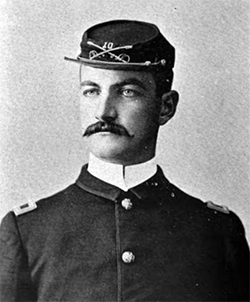 At the time of the Spanish-American War, the North Carolina State Guard contained five divisions of naval reserves. The state's first fallen soldier, and the first naval officer to be killed in the conflict, was Ens. Worth Bagley of Raleigh. Bagley was killed in action at Cardenas, Cuba, on 11 May 1898. The most widely acclaimed North Carolina army hero of the war was Lt. William E. Shipp of Lincolnton. On 1 July he was killed in action while leading troops of the 10th Cavalry Regiment in the charge up San Juan Hill near Santiago. Some observers maintained that this charge saved the "Rough Riders" and future president Theodore Roosevelt from destruction. Camp Bryan Grimes was renamed Camp Shipp-Bagley in honor of those two heroes.

Members of the 3rd Regiment experienced the Spanish-American War in a way uniquely related to their racial identity. Although many blacks had disagreed about intervention in Cuba-considering the issues of repression and racism on the home front of paramount concern-the declaration of war against Spain put their role in a different perspective. The war afforded African Americans an opportunity to prove themselves, furthering black status and identity while establishing their patriotism and national loyalty. Black troops were, moreover, determined to take on more than a menial role. Although blacks had previously contributed two infantry battalions to the State Guard, by 1898 their numbers had dwindled to a single company (the Charlotte Light Infantry) enrolled in the militia.

Governor Russell involved Senators Jeter C. Pritchard and Marion Butler, his close friend J. C. L. Harris in Washington, D.C., and in-state black leaders, such as George H. White and Henry P. Cheatham, in the effort to secure a full regiment of black volunteers. The governor appointed Col. James H. Young-the former editor of the influential Raleigh Gazette, a previous Wake County representative in the General Assembly, and an active member of the Republican Party-as commander of the 3rd Regiment. Russell's Democratic rivals interpreted this decision as a bid for black political support, and Russell, Young, and the 3rd Regiment all withstood considerable acrimony. The resentment created by their presence in both Knoxville and Macon made black troops realize that they would return home to face civilian life in an atmosphere highly charged with racial hatred from hostile newspapers, police forces, and citizens-a situation exemplified by the Wilmington race riot that followed the heated white supremacy political campaign of October-November 1898.

Edward A. Johnson, History of Negro Soldiers in the Spanish-American War, and Other Items of Interest (1899).