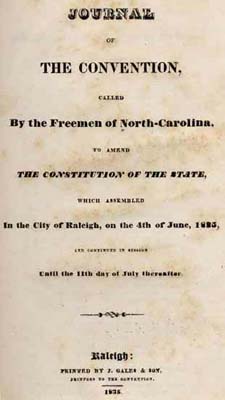 The constitutional convention of 1835 was convened to modify the North Carolina Constitution of 1776. Some provisions of the 1776 document were rooted in the colonial experience, and a growing segment of the population came to consider them impediments to an emerging nineteenth-century democratic society, with its developing systems of education, economy, and internal improvements. Efforts to revise the 1776 constitution began shortly after the Revolutionary War and continued periodically until a convention was convened in 1835, when the strong east-west sectionalism over the issues was finally overcome.

The principal changes effected by the 1835 convention involved the election process, including voter qualifications and rules for legislative apportionment. One modification was a shift from annual to biennial elections and sessions of the General Assembly. The composition of the State House of Representatives continued to be based on the county unit system, which guaranteed each county at least 1 representative and permitted a maximum of 120 throughout the state. The 1776 voter qualification of taxpaying "freemen," which still excluded women, was retained to elect state representatives. However, free blacks who had been previously allowed to vote were now disfranchised. The "federal population," which included three-fifths of the former slaves, was used to calculate the apportionment of the remaining representatives beyond the one-per-county guarantee. "Borough" representation, a remnant of the English system, which granted a special representative to towns of commercial importance, was eliminated. Edenton, New Bern, Wilmington, Salisbury, Hillsborough, Halifax, and Fayetteville, previously designated as "borough towns," no longer enjoyed this privilege.

The basis of representation for the North Carolina Senate was changed from a county to a district unit formulated according to the state tax base. A maximum of 50 senators was prescribed, but property ownership was retained as a qualification to vote. None of the existing 65 counties was to be divided in forming the senatorial districts.

The governor, previously elected annually by the legislature, would now be chosen biennially by the same voters who elected the state representatives. This marked the beginning of modern political campaigning, as gubernatorial candidates sought the statewide support of the voting public for the first time. The change also removed the governor's office from a position of almost total subservience to the General Assembly.

The 1835 constitutional convention also extended the religious qualification for holding state office to include not only Protestants but also all other Christians, instituted an impeachment process for state officers, imposed some limitations on the General Assembly in passing private legislation, and developed a procedure for amending the state constitution in the future.

North Carolina Constitutional Convention. 1835. Journal of the Convention, Called by the Freemen of North-Carolina, to Amend the Constitution of the State, Which Assembled in the City of Raleigh, on the 4th of June, 1835, and Continued in Session Until the 11th Day of July Thereafter. Raliegh: J. Gales and Son. Online at DocSouth at https://docsouth.unc.edu/nc/conv1835/menu.html.

"Cover." 1835. Journal of the Convention, Called by the Freemen of North-Carolina, to Amend the Constitution of the State, Which Assembled in the City of Raleigh, on the 4th of June, 1835, and Continued in Session Until the 11th Day of July Thereafter. Raliegh: J. Gales and Son. Online at DocSouth at https://docsouth.unc.edu/nc/conv1835/menu.html. Accessed 06/05/2012.

Quite surprisingly, it seems that there are no facsimile reproductions of the constitutions.  I checked with the publications division of the North Carolina State Office of Archives and History and they do not print reproductions nor are they aware of any other agency that does.

I can direct you to the following resources, if you are interested in the content, at any rate:

I hope this helps some!  Please let me know if I can help with anything else or answer any additional questions.

Is it possible to get printed

Is it possible to get printed copies and reproductions of these earlier North Carolina Constitutions through a state agency or university archives? I'm interested in the 1776 and 1835 versions.