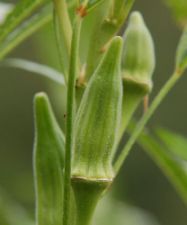 Okra, a popular vegetable of the mallow family grown in North Carolina and elsewhere in the South, is believed to be named for the town of Accra, Ghana, in West Africa. From there in the eighteenth century, okra was taken by Africans or slave traders by way of the West Indies into what became the southern United States. It promptly became popular in the region, where the climate favored its growth. In North Carolina and other southern states, the young seed pods of okra, a mucilaginous plant, are boiled or fried or used in combination with tomatoes in soups and stews. With the shortage of coffee during the Civil War, parched okra seeds were found to be an acceptable substitute, but the shortage of even this source led to the realization that roasted grains of rye were more palatable.