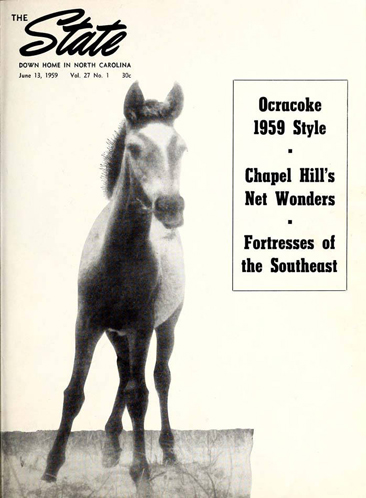 Our State magazine's name and subtitle, Down Home in North Carolina, capture its mission of describing the state's people, places, history, and folklore. Newspaperman and radio broadcaster Carl Goerch set out in 1933 to publish "a weekly survey of North Carolina, dedicated to cause people to be more appreciative of their state by becoming better acquainted with it." Goerch was supremely confident in launching a magazine during the Depression, and his good name and salesmanship drew the backing of business leaders. Early advertisers included R. J. Reynolds, Liggett & Myers, the American Tobacco Company, Jefferson Standard Life Insurance, Wachovia Bank, and Carolina Power & Light.

Goerch first published his magazine on 3 June 1933 under the banner The State, a title that was used for 63 years. He called his job "a picnic and a vacation," as he crisscrossed the state promoting his magazine, gathering material, and selling subscriptions. He also filled the publication with his own humorous observations on life in North Carolina. A native New Yorker, Goerch noted the difference between North Carolinians and his Empire State brethren: "We folks down here get more pleasure out of five years of living than those damn Yankees get in a lifetime." Longtime contributor Billy Arthur compared The State to a small-town newspaper, given its chatty bits of statewide news, editorials, quizzes, and humorous columns.

In 1951 Goerch sold the magazine to Bill Sharpe, also a former newspaperman and a former state advertising director. Sharpe added features but switched from weekly to monthly publication. In strident editorials he took on communists, integrationists, and others on the national and international scene, making for a curious editorial mix, but he also knew his beat. Sharpe won the Mayflower Cup, at the time the state's top literary award, for A New Geography of North Carolina, a four-volume collection of his feature stories on North Carolina counties.

W. B. Wright, publisher from 1965 to 1987, brought to the job newspaper experience, a degree in creative writing, and a 16-year apprenticeship at the magazine. Wright gave additional play to historical and business stories and published the work of leading North Carolina writers.

For many years The State was a fixture in homes from Cherokee to Chicamacomico. It was dependable, informative, and entertaining. It was also quaint. Its appearance changed little over a half century, remaining resolutely black and white through the technicolor and psychedelic eras.

In 1987 Shaw Publishing in Charlotte bought the magazine, adding color and updating its graphic design. In 1996 Shaw sold it to Bernard Mann, a publisher and former radio executive who moved The State to Greensboro. With the August 1996 issue, Mann changed the name to Our State, explaining that the new name was warmer, more inclusive, and more suited to the publication. Mann also increased the use of color photographs and improved the magazine's design but retained its editorial focus.

Our State readers are fiercely loyal. Mann's initial marketing research revealed a subscription renewal rate of 87 percent, measured against the industry standard of 35 to 37 percent. By 2004 circulation had grown to 120,000, which included paid subscriptions, newsstand sales, and complimentary copies. Approximately 85 percent of the paying subscribers lived in North Carolina.