Mass advertising in North Carolina began with the founding of the printing trade in the eighteenth century. James Davis, the state's first printer, established the North-Carolina Gazette in New Bern in August 1751. To make the paper successful, Davis focused on subscriptions but found them to be an unreliable source of revenue. Far more lucrative were the advertisements that soon appeared, not only in Davis's Gazette but in other colonial newspapers, such as Andrew Steuart's North-Carolina Gazette (1764-67) and Adam Boyd's Cape-Fear Mercury (1769-76). Newspapers between 1751 and 1778 featured ads relating to property and trade (the buying and selling of slaves and servants; the buying, selling, and leasing of real estate; the importation and exportation of commodities) as well as cultural and social affairs.

Broadsides were a popular advertising medium throughout the colonial and antebellum periods. Unlike newspapers, broadsides were printed on only one side of a sheet of paper. They were handed out individually and were used to advertise everything from theatrical performances, railroad schedules, store openings, and rewards for runaway slaves to the messages of poets and other writers, political parties and candidates, religious societies, reform organizations, and businesses.

Magazines (periodicals or journals) began appearing in North Carolina around the middle of the nineteenth century. The decision to include advertising varied with the publication, with many accepting ads relevant to their trade or profession. For example, the North Carolina Journal of Education, established in 1857 under the editorship of Calvin H. Wiley, ran ads for schoolbooks, booksellers, academies, and book and job printing. The Medical Journal of North Carolina, begun just prior to the Civil War, included ads for medical books, druggists, and the Medical College of Virginia and its hospital. Other magazines such as the North Carolina Historical Review, Popular Government, or Appalachian Journal did not include advertising.

North Carolina entered the world of radio advertising in April 1922 with the establishment of the state's first commercial radio station, WBT in Charlotte. Advertisers increasingly employed the power of radio, and by the 1950s, television, to carry their message to thousands, even millions, of North Carolinians in an instant.

The first advertising agency in North Carolina is believed to have been Bennett Advertising, established in 1922 in High Point by Harold C. Bennett. The firm continued under that name until the 1970s, when, following Bennett's retirement, it became Behrends and Company, with Richard D. Behrends as president. Most of Bennett's accounts were with out-of-state clients. By 1965 there were more than 50 reported advertising agencies in North Carolina. By 2000 the number of agencies capable of assuming responsibility for complete advertising campaigns in the state had reached 626. 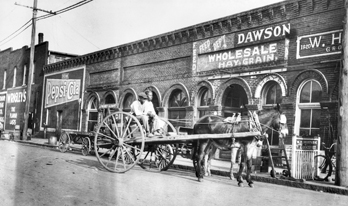 Modern advertising in North Carolina, as in every U.S. state, is sustained by the growth of high-tech media, which still includes radio and television but since the mid-1990s has become increasingly dominated by the Internet. Even the somewhat homely, old-fashioned highway billboard has been updated: many now feature computerized screens capable of changing images to advertise a variety of products from one location. Controversy has developed over the legality and suitability of these billboards and other low-tech versions in certain sections of the state's highway system. Various public policy groups have fought against billboard usage with the backing of the federal Highway Beautification Act, an environmental law passed by Congress in 1965.

Advertisements appearing in the 4 Nov. 1820 issue of the Cape-Fear Recorder in Wilmington. North Carolina Collection, University of North Carolina at Chapel Hill Library.