Queen Anne's War, known in Europe as the War of Spanish Succession, was another attempt by King Louis XIV of France at territorial 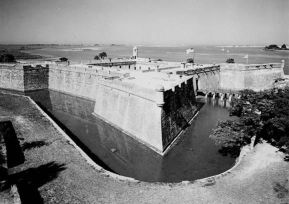 expansion in Europe. The majority of military activity in the American colonies took place in the New England area, but with the French occupation of the Lower Mississippi Valley in 1699, North Carolina and the southern colonies were directly threatened by England's Bourbon enemy. With war declared in 1702, French officer Pierre Lemoyne, Sieur d'Iberville, had already concluded an alliance between France and the Choctaw and Chickasaw nations in the lower Mississippi. With this support, d'Iberville was ready to implement his own plan for the French pacification of the English colony of Carolina.

D'Iberville's "Project sur la Caroline" of 1702 called for a Franco-Spanish alliance to proceed in a joint expedition to capture Carolina. Six hundred Spanish troops from Havana, St. Augustine, and Vera Cruz would be joined by 300 French, 100 Canadians, and 1,500 Indians, making a force of 2,500. This army would then sweep northward through Carolina toward Virginia. With this proposed conquest of Carolina, the stage would be set for an alliance with the Creek, Cherokee, and Tuscarora tribes located in and around the colony. This new Indian alliance would give the Franco-Spanish army the manpower to conquer Virginia and drive north, easily taking the other English seaboard colonies. Although clearly defined in terms of goals, the project was opposed by the French ministry and never carried out.

D'Iberville's machinations, coupled with an unsuccessful attack on Charles Towne (Charleston, S.C.) by Spanish governor Zúñiga in 1702, prompted Carolina to plan a counterattack. In September 1702, Governor James Moore of South Carolina led a force of 500 Carolinians and 300 Indians against the Spanish city of St. Augustine. Arriving on 27 October, Moore's fleet of eight ships found St. Augustine deserted and its inhabitants fortified in the Castillo de San Marcos, located just north of the city. Unable to breach the walls of the fort, Moore lay siege to it for eight weeks; however, without siege weapons, Moore's four cannons were useless. Mid-December saw Spanish reinforcements arrive from Havana to lift the siege. Burning their ships and the town of St. Augustine to avoid capture, Moore's Carolinians fled northward on foot to Charles Towne.

With Moore's return, the emphasis of the war in the South now turned toward southern Carolina and the destruction of the Apalachee Indians, allies of the Spanish. By 1704 Moore had totally subjugated the Apalachee and eliminated Spanish influence in the region. As a result, Carolina no longer stood in danger of invasion from Spanish troops from the south. The fighting moved northward, and the South was left relatively calm for the rest of this conflict.

Robbie Franklyn Ethridge, From Chicaza to Chickasaw  The European Invasion and the Transformation of the Mississippian World, 1540-1715, UNC Press: http://uncpress.unc.edu/browse/book_detail?title_id=1772.