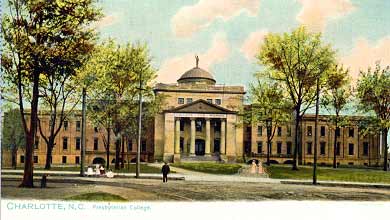 Queens University of Charlotte was founded in 1857 as the Charlotte Female Institute in a building on College Street facing Ninth Street. The Reverend Robert Burwell and his wife Margaret Anna Burwell moved from Hillsborough to Charlotte to open the institute, which operated under an older charter for Charlotte Female Academy. From 1891 to 1896, the school operated as Long's Seminary under the direction of Elizabeth Webb Long. In 1896 it became affiliated with the Presbyterian Synod of North Carolina and became known as the Presbyterian College for Women. In 1912 the college moved from its College Street location to 50 acres in Myers Park. To inspire renewed interest in the school, the trustees changed the name to Queens College in commemoration of the first institution in North Carolina to carry the name, begun in 1771 but disallowed by the British Crown in 1772. Chicora College in Columbia, S.C., merged with Queens in the fall of 1930, and for almost a decade the college went by the hyphenated name of Queens-Chicora.

With the return of the soldiers from World War II, Queens College began to admit male students in 1946 as day students and became fully coeducational in 1987. The college began offering graduate degrees in business administration in 1980 and steadily added graduate programs over the next 20 years. In 2001 the trustees agreed to change the institution's name to reflect its enhanced educational programs, adopting the name Queens University of Charlotte in 2002. The modern-day Queens University has approximately 1,200 students and 91 faculty members.