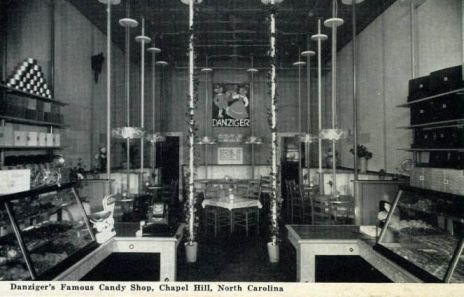 The European refugees who came to North Carolina in the years of Hitler's ascendancy in Germany added significantly to the state's academic institutions and enriched its cultural life in general. Notwithstanding the plight of the Jewish population and all those who opposed Hitler's National Socialism, the United States was not ready in the 1930s to admit many of those persecuted in Europe. Unemployment remained high as the Great Depression continued, and new laws restricted sharply the number of immigrants who could come to America. Refugees from Germany faced often insurmountable barriers to leaving their homeland, so that only 100,987 of the 211,895 quota spaces for immigration to the United States could be used in 1939-40. Predictably, the flow of immigrants declined drastically after the beginning of World War II.

Relatively few European refugees settled in the American South at first. Leaders at the University of North Carolina at Chapel Hill advocated an open-door policy for admission of new immigrants in 1938, arguing that, because of the South's stagnant economy, "an infusion of new blood would be one of the greatest blessings" in the region. North Carolina thus became foremost among the southern states in offering opportunities to European refugees. In 1933 the experimental Black Mountain College was established near Asheville and invited a host of artists and scientists from all over Europe to join its faculty.

Duke University's president, William P. Few, took advantage of the list of persons in need of appointments circulated by the Emergency Committee in Aid of Displaced German Scholars in 1938 (the German was changed to "Foreign" later on) and brought as many as seven scholars to the university, including Raphael Lemkin, from Poland, who coined the word "genocide"; physicist Fritz London; and psychologist William Stern. During the administration of President Frank Porter Graham, UNC-Chapel Hill also attracted a number of refugees. One of these was Edward Danziger, a confectioner from Vienna who opened what would become a highly successful candy and coffee shop-and later a number of restaurants-in Chapel Hill.

The Chapel Hill members of the Society of Friends (Quakers) were also actively involved in the settlement of refugees in the state. J. Curt Victorius, who became a professor at Guilford College, decided to come to North Carolina after he read an advertisement in the New York Times (placed there by President Graham in the spring of 1938) inviting refugees to the state. Ernst Moritz Manasse in 1938 became the first nonblack faculty member at the North Carolina College for Negroes (now North Carolina Central University). Many nonacademic refugees undoubtedly came to North Carolina as well, although a record of their lives is harder to uncover. One example is Fritz Stern, who arrived in Charlotte via Richmond, Va., in 1943 and founded Southern Knitwear Mills.

You guys are awesome! thank

You guys are awesome! thank you!