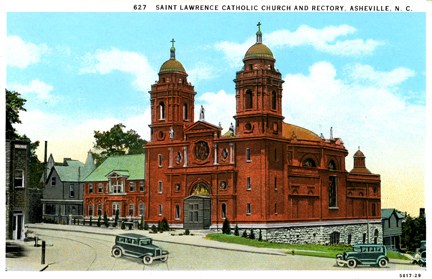 The Roman Catholic Church is a comparatively small but rapidly growing religious force in North Carolina. A few Catholics, the majority of them English, lived in the region during the colonial period. In The Natural History of North-Carolina (1737), John Brickell states that Catholics lived in various places throughout the colony, but "mostly in and about Bath-Town." The first recorded appearance of a priest in the state was in 1784, when Irishman Patrick Cleary settled in New Bern.

The Vatican established an American bishopric at Baltimore in 1789, with John Carroll as the nation's first Catholic bishop. In 1820 southern Catholics were given their own bishop with the appointment of John England as the first bishop of Charleston. England visited North Carolina's scattered flock for the first time in 1821, encountering small numbers of Catholics in various congregations throughout the state-many of them immigrants from diverse countries who were finding it practically impossible to maintain the practice of their faith. England's evangelical efforts during this trip resulted in the conversion of 13 adults and 27 children, several of whom were African American slaves.

A steady influx of Catholic immigrants increased the ranks of the church in North Carolina and throughout the South during the early and mid-nineteenth century. A unique American Catholic identity, born of economic, theological, and cultural struggle, began to develop. Bishop England, acknowledging the lack of religious leadership so vital to Catholic ecclesiology, attempted to encourage lay people to create suitable worship services "so that even when there is no clergyman they may assemble together on the Lord's day" and pray. England's personal charisma and intelligence, and his widely expressed love for the United States and its people, helped North Carolina Catholics avoid much of the animosity experienced by many other Catholics in an overwhelmingly Protestant nation. However, as the number of Catholics grew, a tide of anti-Catholic nativism began to spread, leading to a series of legal and cultural conflicts.

North Carolina's most prominent early Catholic was New Bern lawyer William Gaston, who, after serving in the state legislature from 1813 to 1817, became a member of the North Carolina Supreme Court. In that capacity, he championed religious freedom and argued against the state constitutional ban on Catholics holding public office. The state's first Catholic church was built in Washington in 1828. Churches were also erected before the Civil War in Raleigh (1834), Gaston County (two in 1843), and Charlotte (1852). In 1860 there were 350 Catholics in seven parishes in North Carolina.

A large migration of Catholics from the North and Midwest, relocating primarily for economic reasons, resulted in remarkable growth in the South's Catholic population during the twentieth century, particularly after 1960. As church rolls continued to swell, many new parishes and schools were established in North Carolina. In 1972 the Diocese of Charlotte was formed out of the Diocese of Raleigh, with jurisdiction over 46 of the state's western counties. During the 1970s, the number of Catholics in the state increased by 37 percent, although they continued to make up less than 2 percent of the state's total population (one of the smallest percentages in the nation).

North Carolina's Catholic population during the 1990s continued to be characterized by rapid growth, strained resources, and a sometimes critical dearth of priests. Two diocesan newspapers, NC Catholics in Raleigh and the Catholic News and Herald in Charlotte, cover local issues and events as well as national and international news. The church has been further transformed by the arrival in the state of a huge number of Latinos, most of whom are Catholic and many of whom have turned to the church for social and financial support as well as religious instruction. By the early 2000s, there were approximately 325,000 registered Catholics in North Carolina parishes, with a nearly equal number of unregistered but active Latino Catholics in the state.

Trying to find mycatholic baptism records. born in the Victoria Unit in Asheville ,NC were would I look or write too

You will need to contact the paish where you were baptized. Those are records kept with the chuch

I am looking for a marriage

I am looking for a marriage certificate for William Cox and Ruth Cox married
Dec. 5, 1788.,said by a priest. Do you have records of that and how might I go about getting the information?
Barbara Schoolmeesters
313-215-0723

Thank you for your question. Do you know where (state/county/town) they were married?