The Salvation Army, an international Christian religious and charitable organization founded in England in 1865, came to the United States in 1879. The basic unit of the Salvation Army is the corps community center, which is the local congregational expression of the organization. The corps provides religious activities in the Wesleyan-Holiness tradition and administers social services.

In January 1879 a pioneer Salvation Army officer visited Raleigh to conduct meetings in the chapel of the state penitentiary. At that time the first North Carolina corps was established in Raleigh. In 1887 the 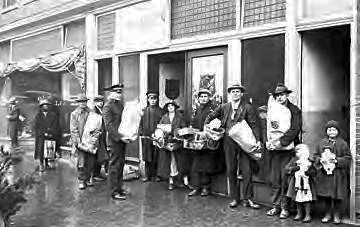 Salvation Army in the Carolinas "declared war on the devil and claimed people for God, parading up and down the streets with fiddles and tambourines." Crowds gathered wherever they appeared, and they generated much excitement. Sometimes they were misunderstood, however, and even jailed; occasionally they were obliged to cease their activities. In addition to the pioneer corps in Raleigh, others were opened before 1900 in Wilmington, Durham, New Bern, Goldsboro, Fayetteville, Kinston, and Asheville. By the early 2000s there were Salvation Army corps in 41 North Carolina cities and towns.

In addition to providing religious services, the Salvation Army in North Carolina operates a variety of institutions, including drug and alcohol rehabilitation centers, camps, homes for transients, and day care centers, and it also offers family assistance programs.

Allen Satterlee, Sweeping through the Land: A History of the Salvation Army in the Southern United States (1989).