The Seaboard Air Line Railway traced its corporate ancestry to the Seaboard Inland Air Line, which was created through an informal agreement in the decade after the Civil War between the Seaboard & Roanoke Railroad (S&R), operating from Portsmouth, Va., to Weldon, and the Raleigh & Gaston Railroad (R&G), extending from Weldon to Raleigh. The two lines desired to protect their joint interests in the developing network of railroads in the region. In 1874 the Virginia legislature gave the S&R the right to acquire connecting companies, and in September 1875 the Seaboard Air Line Agency was formed to implement the legislature's plan. In the nineteenth century the term "air line" commonly referred to a more or less direct route over high ground between cities-in contrast to one that followed the coast or river valleys.

Acting through the two railroads, the Seaboard Air Line Agency acquired the Raleigh & Augusta Air Line Railroad (R&AAL) in November 1875 and struck an agreement with the Carolina Central Railway (CC) for trackage rights between Hamlet and Charlotte in 1877. Through freight and passenger service was established between Charlotte and Portsmouth, Va., which had steamer connections to Baltimore and the North. Early in 1879 the agency was replaced by the Seaboard Air Line Association (SAL), which controlled the S&R, R&G, R&AAL, and CC.

On 1 Aug. 1893 the SAL was reorganized as the SAL Railway System, although each company retained its corporate identity. In the 1920s, under the presidency of S. David Warfield, the SAL entered on a large-scale expansion into Florida, which was enjoying an enormous land boom. Construction began on the Florida, Western, and Northern Railroad to West Palm Beach and reached Miami early in 1927. The boom burst with the stock market collapse of October 1929, and on 23 Dec. 1930 the SAL entered a long receivership that did not end until reorganization of the company as the Seaboard Air Line Railway on 1 Aug. 1945. At that time it operated 3,857 miles of track.

The late 1940s and 1950s were good to the SAL, and for the first time in its history revenues exceeded those of the rival Atlantic Coast Line Railroad (ACL). Tracks, signaling, and equipment were improved, and the great freight yard at Hamlet-the operating heart of the system, where its lines to Florida met with those to Atlanta and Birmingham and to Richmond-was thoroughly modernized in 1954.

Despite the progress of the 1950s, the U.S. railroad industry was undergoing a change. New highways made long-distance trucking formidable competition, and airlines rapidly increased their share of the passenger and freight markets. Some railroads were in financial trouble and seeking to economize through parallel mergers with competitors. In 1960 the SAL and ACL agreed to merge. One share of SAL stock was to be exchanged for one share in the new company. But 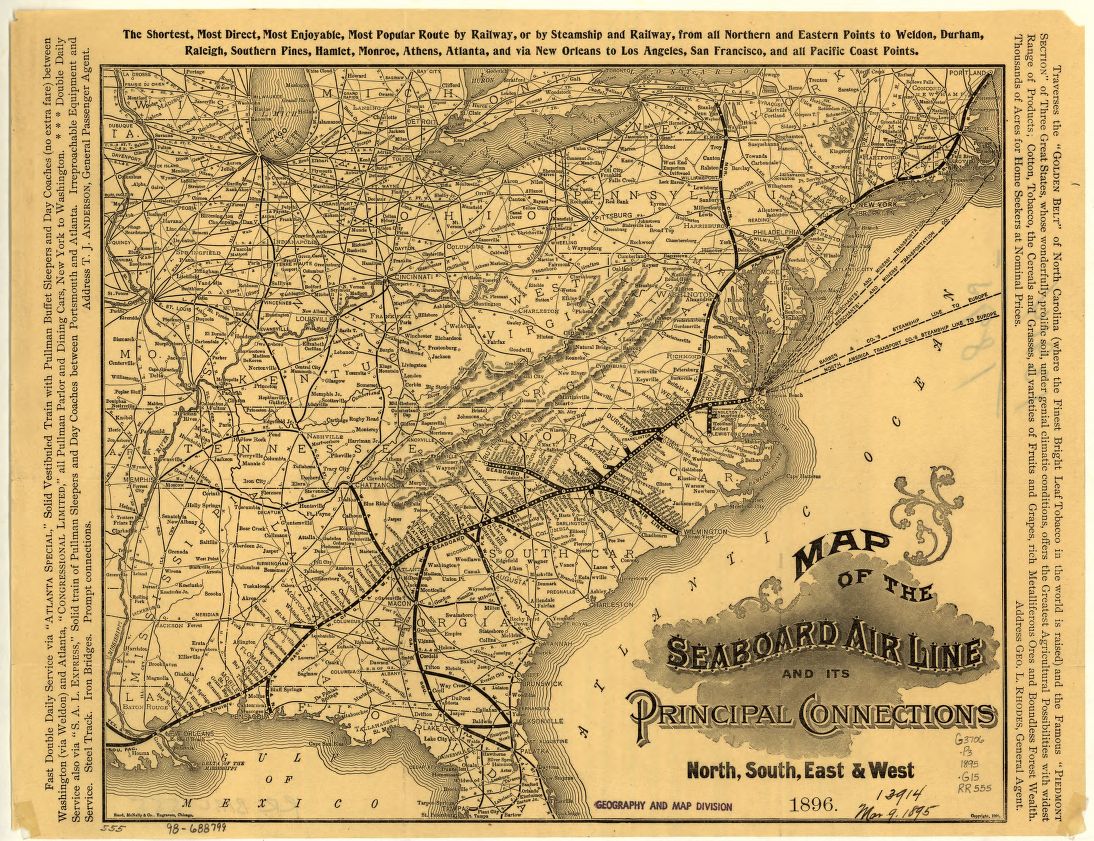 the merger was long delayed by litigation in the courts, where communities, including the city of Tampa, Fla., and shippers sought to preserve competition. The U.S. Supreme Court finally ruled in favor of the companies by a unanimous vote, and on 1 July 1967 the ACL merged with the Seaboard Air Line Railway to form the Seaboard Coast Line Railroad. (The redundant name was chosen to preserve the two lines' shortened names "Seaboard" and "Coast Line," as they were generally known.)

After the merger of the SAL and ACL and subsequent mergers leading to the formation of the CSX Transportation Corporation in July 1987, traffic was rerouted in the most efficient manner and a number of SAL lines were abandoned. Through freight traffic on the former SAL main line across North Carolina was diverted to and from Hamlet by way of Pembroke, over the former Carolina Central route to the former ACL main line. The tracks have been pulled up from a point north of Henderson to Petersburg. The Silver Star passenger train from New York to Florida continues to be operated by AMTRAK but uses a Norfolk Southern Corporation connection from Selma on the ACL line to Raleigh. It then operates over the SAL line through Southern Pines, Hamlet, and Columbia, S.C., to and from Florida.

Robert Wayne Johnson, Through the Heart of the South: The Seaboard Air Line Railroad Story (1995).

The Florida Land Boom was not

The Florida Land Boom was not wiped out by the stock market crash of 1929; it reached a climax in the summer of 1925 and ended before the year was out. Unfortunately, SAL officials pressed on with plans for the Miami extension just when the Florida economy plummeted, which badly hurt the company's finances; when the national depression struck four years later, there were no cash reserves and the company was bankrupted, as you note in this article.

For verification, see the Wikipedia article on the land boom, as well as the book Miami Millions by Kenneth Ballinger, 1936, available at Internet Archive.

Thank you for visiting NCpedia and taking time to share this additional information with viewers!

It should be noted that the

It should be noted that the SAL has an engineering marvel in North Carolina, with the segment between Laurel Hill, NC and just outside of Wilmington, NC (near East Arcadia). The 78.86 mile straight shot between the two points is the longest stretch of straight track in the entire United States.

Thank you for visiting NCpedia and taking time to share this additional information with viewers!

I'm writing a novel. A girl

I'm writing a novel. A girl bought a ticket from venice, Florida to Washington D.C.
How does the train company know she did or didn't get on the train. This took place 1963. Thank you for your help. Rjc

They would not know.

They would not know. Conductors only ensured everyone on the train had a valid ticket. There was no method of tracking individual passengers.