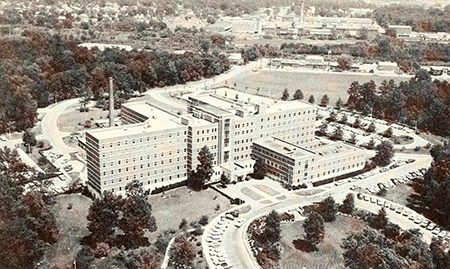 In 1962 dentist George Simkins, physician Alvin Blount, and other African American physicians and their patients sued Moses H. Cone Memorial Hospital and Wesley Long Community Hospital in Greensboro, charging that they had denied "the admission of physicians and dentists to hospital staff privileges, and the admission of patients to hospital facilities, on the basis of race." The plaintiffs argued that the two hospitals, which had received a combined total of $3.2 million in state and federal construction funds under the 1946 Hill-Burton Hospital Survey and Construction Act, had violated their rights under the Equal Protection clause of the Fourteenth Amendment. The plaintiffs also sought declaratory judgment that the sections of the Hill-Burton Act and Public Health Service Regulations providing for separate-but-equal facilities and services were unconstitutional in violation of the Fifth and Fourteenth Amendments. U.S. attorney general Robert F. Kennedy filed an amicus brief on behalf of the plaintiffs.

On 5 Dec. 1962 the U.S. District Court, Fourth Circuit, upheld the defendants' claim that participation in the Hill-Burton program had not rendered the private, nonprofit hospitals "instrumentalities of the state" and therefore they were outside the provenance of the Fifth and Fourteenth Amendments. In November 1963 the U.S. Court of Appeals, Fourth Circuit, overturned the federal district court ruling, finding that private hospitals that participated in the Hill-Burton program were indeed connected to the government-both state and federal-and were thus obligated by the prohibitions against racial discrimination outlined in the Fifth and Fourteenth Amendments. The court also found unconstitutional the sections in the original Hill-Burton Act that provided for separate-but-equal hospital accommodations and services.

The Simkins decision marked the first time that federal courts applied the Equal Protection clause of the Fourteenth Amendment to prohibit racial discrimination by a private entity. This revised the precedent set by the 1883 civil rights cases, in which the Supreme Court narrowly interpreted the Equal Protection clause to prohibit discrimination only by government agencies that were clearly public in character. The broadened definition of "state action" that resulted from Simkins made it possible for Congress to pass the 1964 Civil Rights Act the next year, outlawing segregation in public accommodations and prohibiting racial discrimination in employment.

Until the Simkins ruling, most hospitals in North Carolina and throughout the South did not accept black patients on an equal basis and did not allow black physicians to admit patients or train as interns. Only at North Carolina's nine all-black hospitals could African American patients and physicians be guaranteed equal access, but such facilities were often overcrowded and unable to afford medical equipment considered standard in most white hospitals. By 1963 a few public hospitals had desegregated, although most still assigned black patients to separate, inferior wards. Almost no hospitals in North Carolina-public or private-permitted black physicians to obtain staff privileges until after Simkins.