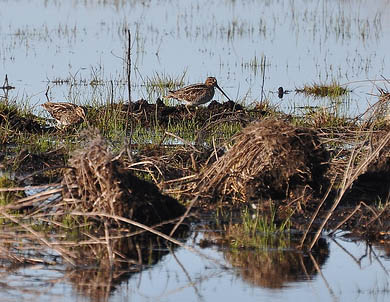 Snipe hunting in North Carolina denotes one of two forms of recreation. The first, probably the more common, involves a practical joke wherein pranksters take an unsuspecting initiate into the woods at night to hunt for an imaginary bird, only to leave him or her confused and alone in the darkness. A second type of snipe hunting involves a bird that exists in reality rather than legend. The common snipe (Capella delicata), known variously as Wilson's snipe, bog snipe, and jacksnipe, inhabits both brackish and freshwater marshes in the coastal plain and affords rigorous winter sport to hunters who flush the birds while slogging through marshland and muddy fields in chest waders or hip boots. The common snipe's larger and more widely disseminated cousin, the woodcock (also known as the timberdoodle or swamp partridge), is more often than not called "snipe" by North Carolina hunters. In the northeastern states the woodcock is a major game bird, but in North Carolina it more often serves as a target of opportunity for quail hunters than as a specific object of pursuit.

Cornell Lab of Ornitology, All About Birds, Wilson's Snipe: http://www.allaboutbirds.org/guide/wilsons_snipe/id