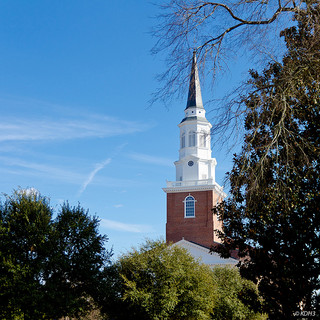 The impetus for the establishment of a new seminary was the tremendous growth of the Southern Baptist Convention during the middle of the twentieth century. Many ministers from the southeastern region of the United States found it difficult to relocate to the cities where the three existing seminaries were located. Furthermore, those three schools were experiencing record growth in enrollment.

Wake Forest College moved to Winston-Salem in 1956. Previously, in 1950, the Southern Baptist Convention had voted to purchase the campus for the sum of $1.6 million. Following the move of Wake Forest College, the seminary undertook an extensive renovation of the campus to improve facilities for growing enrollment, which by 1986 had reached 1,200. The seminary experienced a major change in 1987 as a result of the so-called inerrancy controversy in the Southern Baptist Convention. The board of trustees, dominated by fundamentalists, came into conflict with the school's administration and faculty over what they perceived as a liberalization of theology, leading to the resignation of the school's president, Randall Lolley. Under the presidency of Lewis Drummond, continuing conflict between the faculty and trustees caused sharp divisions and led to a decline in student enrollment. Through Drummond's leadership, the seminary affirmed its commitment to fundamentalist principles and established new faculty guidelines. Paige Patterson succeeded Drummond in 1992 as president of the seminary.