Hang gliding has been associated with the North Carolina coast from the sport’s earliest incarnation. Francis Rogallo and his wife and coinventor Gertrude set out in the early 1940s to see if they could design a kite or flexible wing that could be held together in controlled flight by the action of the air itself. The result, patented in 1947, was the Rogallo Wing, which was considered in the early years of the space program as a possible method of returning space capsules to earth. The Rogallos began examining the possibility of developing a man-carrying Rogallo Wing at Southern Shores, just north of Kitty Hawk, in 1967, conducting experiments on the beach in front of their cottage with the help of a daughter and interested neighbors. The couple moved to Southern Shores in 1972, by which time people were building and flying their own Rogallo Wings with modifications that included the addition of tubes on the wings and keel and a crossbar in front. The term “hang gliding” soon came into use, probably when practitioners had difficulty describing their unusual activity as Rogalloing or, even worse, Rogallo Winging. Interest in the new activity spread so rapidly that the first national hang gliding meet was held in the summer of 1973 at Jockey’s Ridge. 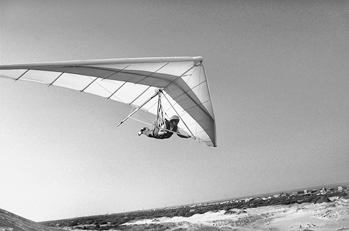 A Rogallo Wing has no engine, no wheels, no brakes—in fact no moving parts. The rider takes off in the Rogallo Wing running downhill as fast as possible with the wing in front. The position of the nose must be exact, because miscalculating can result in either too much drag or the nose dipping and ramming into the ground. Once in flight, the rider hangs in a prone position, face down, in a harness that hugs his or her hips, with hands holding on to the crossbar in front. To nose down, the rider pulls forward a little bit; to nose up, the rider pushes back; and to turn left or right, the rider pushes his or her body to the desired side. The easiest part of all is landing: the rider simply noses way up, causing forward motion to stop, and lands on his or her feet like a bird.

The procedures followed by the first people to experiment with the Rogallo Wing have continued, as fliers using hang gliders the world over have learned to climb and stay aloft for hours by flying back and forth in rising air currents. Thousands of people, men and women, children and seniors, have taken lessons and learned to fly hang gliders at Jockey’s Ridge. In fact, the ridge’s name has become almost as synonymous with hang gliding as those of nearby Kill Devil Hills and Kitty Hawk are with the first flights by Orville and Wilbur Wright in 1903. Grandfather Mountain and other sites in the western section of North Carolina have also become favorite spots for hang gliding enthusiasts.

Wolfgang Langewiesche, "The Flyingest Flying There Is," Reader's Digest (February 1974).