To most sports fans, the mention of North Carolina will evoke one of two sports: college basketball or stock car racing.  The state is a hotbed of both, and arguably the birthplace of the latter.

North Carolinians have participated in various athletic activities since before they were called North Carolinians, going back to Native American games such as chunkey and stickball (the forerunner of modern lacrosse), British-imported games such as quoits and rounders played by early European colonists, and the timeless sport of horse racing, an avid pursuit of Andrew Jackson and, if a Bath folk tale is to be believed, the Devil himself.

Organized spectator sports, such as we enjoy today, did not begin until the post-Reconstruction era, and did not flourish until the 20th century, when increasing industrialization produced a population concentrated in cities and towns, as well as a population with the leisure time and disposable income necessary to support the various teams. 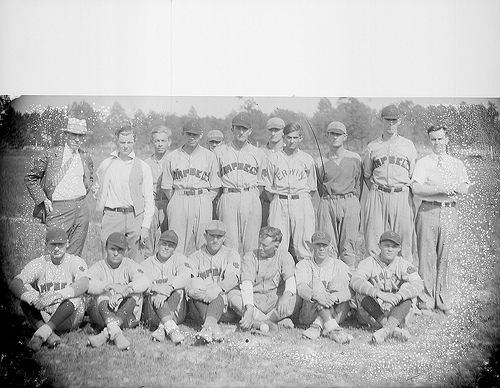 Textile mills, furniture factories, and tobacco processing led North Carolina into industrialization, and likewise led the way into big-time spectator sports.  Textile mills in particular sponsored semi-pro baseball teams, many of which evolved into minor league farm clubs such as those in the still-active Carolina League.

College baseball was also a major draw in the first half of the 20th century, especially the traditional Easter Monday games played annually from 1899 to 1957.  Usually played at the State Fairgrounds in Raleigh, the Easter Monday games drew crowds of more than 6000, many of them brought by specially commissioned trains, and the games, as they grew in popularity, were accompanied by pageants and parades.

Though college football in North Carolina lags in popularity behind the sport in other Southern states, and behind college basketball within the state, North Carolina could claim to be a hotbed of college football in the middle of the 20th century.  Wallace Wade left the University of Alabama to become the head coach at Duke University in 1930.  During the 1930s, the Blue Devils won five Southern Conference titles; their 1938 team, led by their vaunted “Iron Dukes” defense, is one of only three major college football teams to complete the regular season unbeaten, untied, and unscored upon.  Under Coach Wade, the Blue Devils played twice in the Rose Bowl.  Duke, in fact, was the host of the 1942 game, the only Rose Bowl played away from its iconic Pasadena stadium (due to post-Pearl Harbor fears of an attack on the West Coast).

After World War II, the state’s biggest football hero was Asheville’s Charlie “Choo Choo” Justice, an All-American running back for the University of North Carolina; Justice twice finished second in voting for the Heisman Trophy, given annually to college football’s most outstanding player.  College football began to cede its popularity to basketball in the 1950s, but North Carolina continued to produce gridiron stars, notably Roman Gabriel and Sonny Jurgenson, both graduates of Wilmington’s New Hanover High School who went on to distinguished professional careers.

North Carolina’s most successful college football program of the 21st century is at “little” Appalachian State University in Boone, which won three straight NCAA Football Championship Subdivision (formerly Division I-AA) titles between 2005 and 2007.  The Mountaineers also produced what many consider the biggest upset in college football history, when they traveled to Ann Arbor, MI, to beat the then-#5-ranked Michigan Wolverines, 34-32, on September 1, 2007.

At the same time that baseball and football were growing in popularity within the state, the ancient Scottish game of golf was finding a congenital home in the Sandhills resort of Pinehurst.  Pinehurst built its first golf course in 1898, and it proved so popular with their well-heeled guests that the resort owners built the course that would make it famous – the Donald Ross-designed #2 – in 1907.  Golf would be thought a rich man’s game through the first half of the 20th century, until Arnold Palmer – a groundskeeper’s son who played his college golf at Wake Forest – brought the sport to unprecedented widespread popularity in the late 1950s and early 1960s.  The U.S. Open, one of professional golf’s four annual “Majors,” was played at Pinehurst #2 in 1999 and 2005, and will return to the course in 2014. 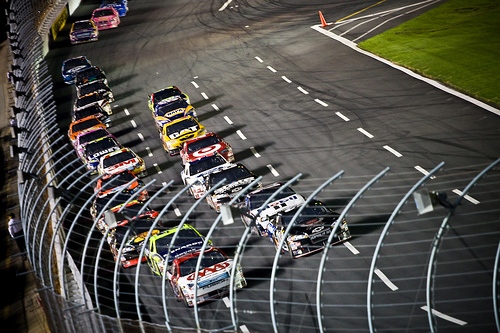 Industrialization brought the conditions for most spectator sports to thrive, but it also brought, in the form of the automobile and modern roads, the conditions needed to create what would become the state’s most popular spectator sport.  North Carolinians had produced moonshine whiskey since the colonial era, but the car – and the state’s “Good Roads” campaigns of the early 20th century – allowed moonshiners to expand their markets.  In doing so, the bootleggers who delivered the contraband liquor had to learn how to improve the speed and performance of their factory-built cars, or face prison if the federal government’s “revenuers” caught them.  Inevitably, the bootleggers challenged each other in races to see who had the fastest cars and the steadiest nerves, and stock car racing was born.  Though the sport’s governing body, NASCAR (the National Association of Stock Car Auto Racing), was formed and is headquartered in Daytona Beach, FL, North Carolina is recognized as the spiritual home of the sport, and the physical home of most of the teams competing on today’s NASCAR circuit.  The NASCAR Hall of Fame, opened in 2010, is in downtown Charlotte, and the only three drivers in the hall’s first class of inductees are all North Carolinians: Level Cross’s Richard Petty, the “King” of NASCAR, the only driver to win 200 races and the first to win seven top-level championships; Kannapolis’s Dale Earnhardt, the “Intimidator,” the second driver to win seven championships; and Wilkes County’s Junior Johnson, an actual one-time bootlegger who served a federal prison sentence (though he was never caught behind the wheel of a car, and was pardoned by President Ronald Reagan in 1986). 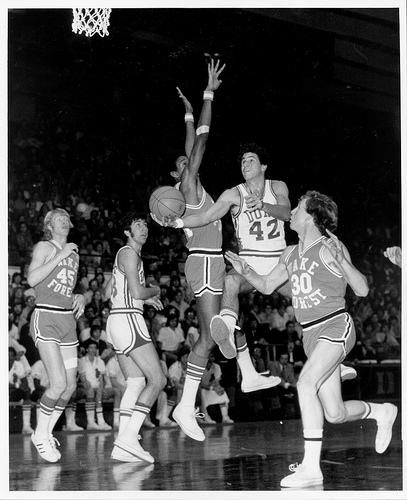 The only sport to rival NASCAR’s popularity in North Carolina is college basketball.  Like NASCAR, college basketball did not find a widespread audience in the state until the 1950s, but it quickly captured the attention and affection of sports fans and has not let go.  The boom began when North Carolina State University hired Indiana native Everett Case as the head coach of its men’s team in 1946.  Case set out not only to improve the Wolfpack, but to spread the gospel of the hardwood throughout his new home state.  State’s neighbors and Southern Conference (later Atlantic Coast Conference) rivals – Duke University, the University of North Carolina at Chapel Hill, and Wake Forest College (later University) – began the hoops version of an arms race to keep up with Case and his Wolfpack.  Each school found a coach who could raise the level of competition – Vic Bubas at Duke, Horace “Bones” McKinney at Wake Forest, and Frank McGuire at UNC, which beat Wilt Chamberlain and the University of Kansas to win the 1957 national championship.  Davidson College, though not an ACC school, rose to national prominence in the 1960s under coachCharles “Lefty” Driesell.  Soon the name “Tobacco Road” became synonymous with excellent college basketball teams and their passionate fan bases.

Though largely left out of the spotlight, the state’s African-American colleges developed outstanding basketball programs, as well.  John McClendon, head coach at what would become North Carolina Central University in Durham, had learned the game from its inventor, James Naismith; McClendon invented what is now known as the fast break.  At what is now Winston-Salem State University, Clarence “Big House” Gaines won the first of his 828 victories.  Gaines was only the second college coach to win more than 800 games, and was the game’s winningest active coach when he retired in 1993.  He still ranks #9 on the all-time wins list.

The ACC’s “Big Four” continue to account for the bulk of basketball’s popularity in North Carolina.  N.C. State won the national championship in 1974 under coach Norm Sloan, with a team led by Shelby’s David Thompson.  The Wolfpack won it all again in 1983, with new coach Jim Valvano leading the “Cardiac Pack” on an improbable run to the NCAA title.

The UNC Tar Heels, under legendary coach Dean Smith, won two more national championships in 1982 and 1993; the winning points in the 1982 title game were scored by a freshman from Wilmington named Michael Jordan, who would make a bit of a name for himself in the National Basketball Association.  Black Mountain native Roy Williams, an assistant coach on Carolina’s 1982 team, came back to Chapel Hill as head coach in 2003.  His teams won two more national titles in 2005 and 2009.

By the closing decades of the 20th century, North Carolina had become prosperous and populous enough to support major-league professional teams.  Naturally, North Carolina’s first two top-level pro teams played basketball.  The Carolina Cougars, based in Charlotte, competed in the American Basketball Association from 1969 until 1974.  Pro basketball came back to North Carolina in 1988, the inaugural season of the Charlotte Hornets.  The Hornets won only 20 games their first season, but led the NBA in attendance.  They reached the second round of the NBA playoffs in 1993, 1998, and 2001.  The eventual legal troubles of team owner George Shinn caused a decline in attendance, and Shinn moved the Hornets to New Orleans in 2002.  The NBA recognized the Carolinas as a vital basketball market, however, and the Charlotte Bobcats began playing in 2004.  Founding owner Robert Johnson, the NBA’s first African-American team owner, sold the team in 2010 to North Carolina’s own Michael Jordan, the first former NBA player to become a team owner.

Given the state’s tradition in college basketball, it is somewhat ironic that its most successful professional franchises have played football and hockey.  The Carolina Panthers of the National Football League began playing in Charlotte in 1996, after spending their first season playing at Clemson University’s Memorial Stadium in South Carolina.  The Panthers reached the National Football Conference championship game in 1997 and 2006, and barely lost Super Bowl XXXVIII to the New England Patriots, 32 - 29, in 2004.

The National Hockey League’s Hartford Whalers relocated to Raleigh in 1997, becoming the Carolina Hurricanes.  Though North Carolina would not seem a natural home for good hockey, the Hurricanes won the Stanley Cup in 2006, the only major-league championship for a Carolinas team in any professional sport.