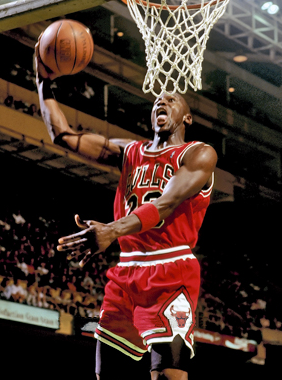 Michael Jordan may have been born in Brooklyn, but North Carolina claims him as one of our own. The Jordan family moved to North Carolina when Michael Jordan was very small and he grew up in Wilmington. Jordan played for Laney High School and went on to play for Dean Smith at UNC where Jordan was twice College Player of the Year.

After being picked by the Chicago Bulls in the 1984 NBA Draft, Jordan was named NBA Rookie of the Year in his first season. He broke many of the league records in scoring and steals, and in the meantime, added two Olympic Gold Medals from the 1984 and 1992 Games.  He retired briefly in 1993 to try his hand at semi-professional baseball, but returned towards the end of the 1994/95 season and eventually led the Bulls to three more of their six league championships.

Though he moved to Illinois he never forgot his ties to North Carolina. He wore his North Carolina uniform shorts under his Chicago Bulls uniform in every game, and in 1995 the Michael Jordan Discovery Gallery was opened with the help of the Jordan family in New Hanover County's Cape Fear Museum in Wilmington.  After his retirement in 1998, he became part owner of the Washington Wizards basketball team. In 2001, he resigned his position as head of basketball operations in order to become an active player again. He retired a final time after the 2002-03 season. Jordan took over as majority owner of the Charlotte Bobcats NBA franchise in 2010.