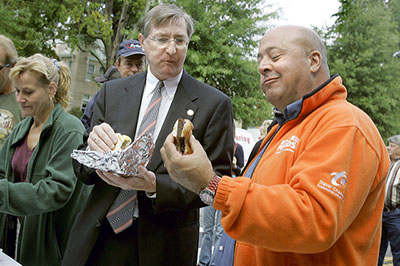 About the Shelby Livermush Festival

The Shelby Livermush Festival, now referred to as ‘Mush Music and Mutts,’ is a two day October festival in Shelby, North Carolina. It was started by the restaurant Mack’s Liver Mush in 1985, and has grown considerably ever since. It is now combined with the annual Pet Festival and the NC Brew fest and Chili cook-off. Popular events include the NC brew fest & Chili cook off, the pet festival, the Foothills farmer’s market, The Little Miss Livermush contest, and the livermush recipe and eating contests. The festival also includes performances by regional musicians, a Kids Zone with activities and games, and plenty of food.

In 2009 the Shelby Livermush Festival was featured in the Travel Channel's tv series "Bizzare Foods with Andrew Zimmerman."

About the Marion Livermush Festival

The Marion livermush festival is a one day June event in Marion, North Carolina. It began in 2007 and is sponsored by Hunter’s Liver Mush. The festival is noted for its livermush eating contest and the hog calling contest. The event also includes performances by local musicians and inflatables for children.