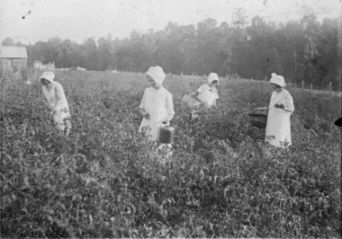 Tomato clubs, promoting the involvement of young girls in finding ways to increase the production of agricultural crops, were started by the North Carolina Department of Agriculture in 1911 at the prompting of the U.S. Department of Agriculture. Each tomato club member was challenged to grow and can as many tomatoes as she could on one-tenth of an acre of land. Girls in Guilford County started tomato clubs through the efforts of educator Jane S. McKimmon, who held canning club "short courses" at Elon College and Peace Institute, teaching the proper methods of sterilizing and sealing cans. By 1916 thousands of cans of tomatoes and other foods had been produced. McKimmon's efforts eventually led to a vigorous network of 4-H Clubs across the state.