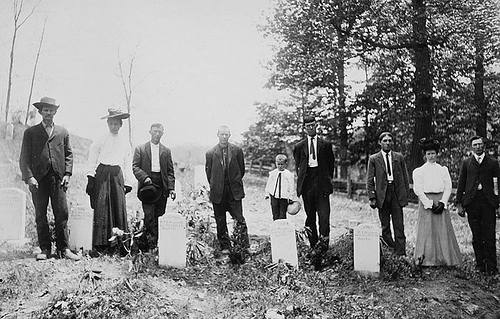 Because of a lack of native stone in the coastal region where European settlement began, the earliest North Carolina grave site memorials were stakes or crosses made of wood, especially cypress, and have almost entirely disappeared. Fieldstones were used where available, but only wealthy settlers could afford hewn stone brought in from elsewhere. Many early graves were marked by small pyramids of brick. By the mid-eighteenth century and for a hundred years thereafter, barrel vaults of brick became common among landowners. However, no extant engraved markers that date to before the 1750s are known. Soapstone, relatively easy to carve, was commonly used in the western counties between about 1750 and 1825. Marble became popular after 1840 and granite soon thereafter.

Throughout North Carolina, the vertical headstone has always been the most common grave marker. Added footstones became common during the mid-1700s and into the 1800s, giving the visual impression of a bed. During the mid-1800s a French-style grave marker appeared, typified by headstone, footstone, and side rails with bedded or potted plants inside. Affluent families as long ago as the late 1700s sometimes chose horizontal "ledger" stones, rectangular, body-length slabs laid flat on the ground atop the grave, possibly to discourage grave robbers. These ledger stones frequently have notable epitaphs. Variations include the table stone, raised upon low brick pilings (usually four or six); chest or "box" graves; and altar tombs.

Commercially carved stones begin to appear in North Carolina after about 1830. Prior to that, stones were often carved by artisans for whom stonework was an avocation or secondary occupation. Their carvings typically consist of simple, often baleful, motifs such as the spirit skull (or "death's-head"), the hourglass, the scythe, the finger pointed heavenward, and the secular urn. With the gradual shift in attitudes toward death associated with the Great Awakening of the 1730s and 1740s, such carvings became softened and more hopeful; the death's-head, for instance, took on wings, and was later replaced by winged cherubs and beatific angels. Other common symbols include anchors (especially at seaside cemeteries), the dove, broken pillars or felled trees, and the Christian cross and crown.

By the late 1800s tombstone design had achieved a high level of sophistication in the cemeteries of North Carolina's major municipalities, often realized in monumental mausoleums designed as temple replicas. Simple epitaphs common until the mid-nineteenth century-usually consisting of no more than the deceased's name and age-gradually took on more detail, often recording age by the year, month and day, as well as the places of birth and death. By the mid-1800s, a lengthy epitaph was often suggestive of affluence. By the close of the nineteenth century, epitaphs became enormously varied and elaborate, sometimes recording the cause of death or quotations from devotional verse. Some are humorous, while others contain references understandable only to the deceased's acquaintances.

The early twentieth century saw a return to brevity and a reawakened interest in symbolic epitaphs. In modern-day North Carolina, as elsewhere, tombstones are most frequently mass-produced, with the stonecutter adding only inscriptions. Stone plaques, set horizontally at ground level, are common since they permit easier, more cost-effective grounds maintenance.

Henry King, Tar Heel Tombstones and the Tales They Tell (1990).