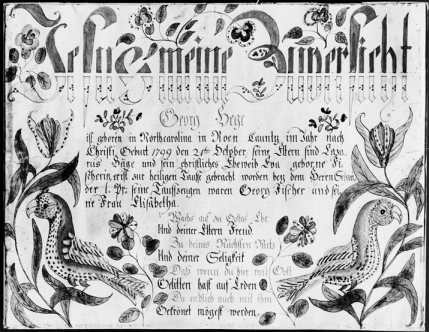 Fraktur is a form of folk art imported by Pennsylvania German immigrants to North Carolina in the eighteenth century. Fraktur's central feature is elaborate lettering based on the German gothic typeface of the same name, which has a "fractured" appearance. Watercolor drawings and illuminated manuscripts in the fraktur style combine bright colors and primitive, symbolic figures in a partially abstract border. Most popular during the second half of the eighteenth century and the first quarter of the nineteenth, fraktur is still produced today.

The primary function of fraktur was not decorative but documentary. The most common form of fraktur was the taufschein, which recorded the details of a child's birth and baptism. Fraktur first developed as a North American art form around 1740 at the German Seventh Day Baptist Cloister at Ephrata, Pa. It became popular among German immigrants, who brought it to North Carolina. The only known North Carolina fraktur artist was the "Ehre Vater" artist. Probably an itinerant schoolmaster, his work has been associated with the Moravian settlement at Wachovia. Over 35 surviving pieces have been attributed to this prolific artist.

Families often preserved fraktur by pasting it inside the lids of dower chests or keeping it between the leaves of a Bible. Surviving fraktur is popular among modern collectors of folk art and antiques.

John Bivins and Forsyth Alexander, The Regional Arts of the Early South: A Sampling from the Collection of the Museum of Early Southern Decorative Arts (1991).

Donald A. Shelley, The Fraktur-Writings or Illuminated Manuscripts of the Pennsylvania Germans (1961).