by Matthew Franke, University of North Carolina at Chapel Hill, 2012 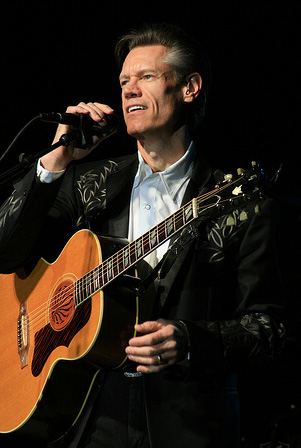 Country music star Randy Travis was born Randy Bruce Traywick on May 4, 1959, the second of six children born to Harold and Bobbie Rose Traywick. While he grew up in the town of Marshville, NC, he was born in the hospital in the nearby town of Monroe. His father, a successful builder, was an enthusiastic country music fan who provided his son with music lessons and instruments from an early age. Young Randy played his first public show in 1968 at the Marshville Elementary School; later Randy performed at a number of local talent shows with his brothers, including the Sandhill Opry in Pageland, SC.

Travis got his first break in early 1977 when he won a talent contest at Country City USA, a club in Charlotte. Randy's success in Charlotte came at a crucial time; he had dropped out of school at the age of fifteen and fallen into juvenile delinquency. Elizabeth "Lib" Hatcher, the owner of Country Music USA, removed him from his dangerous lifestyle, became his guardian in June 1977, and brought him into her home. Soon Randy was singing six nights a week at the club. Lib Hatcher soon became Randy's manager in addition to his employer. Several early recordings were released at this time under Randy's own name, but the most successful ("She's My Woman") only reached number 91 on the country charts.

In 1981, Hatcher and Travis moved to Nashville, where Travis found work at the Nashville Palace, singing under the name "Randy Ray" and washing dishes and cooking. In an attempt to promote his music, Lib and Randy found money to back a live album, Randy Ray Live at the Nashville Palace (1982), but the project did not lead to any major studio offers. But Travis kept working, and in 1984 appeared twice on national television, in a young talent section of the show "Nashville Now," sponsored by The Nashville Network. These appearances improved his fortunes and he signed a contract with Warner Bros. Records in January 1985 for four singles.

The Warner Bros. contract was the beginning of 'Travis's national success. Marketed for the first time as "Randy Travis," Travis saw two of his four singles become hits: "1982" reached number six on the country charts, while "On the Other Hand" went to number one. Travis won the "Best New Male Vocalist" award from the Academy of Country Music in 1985. In March of 1986, he performed at the Grand Ole Opry for the first time; in December he joined their regular cast.. In June of 1986, he released his first studio LP Storms of Life on Warner Bros.. Meanwhile, Storms of Life sold 850,000 copies and reached the number one spot in Billboard's country albums category and number 85 in Billboard's Top 200 albums.

Travis's second album, Always and Forever (1987), cemented his national success, again reaching number 1 on the country chart, and number 19 on the Top 200; the album has sold five million copies. He repeated this success with three more number1 country albums within the next three years (produced, like much of his output, by Kyle Lehning), all of which reached platinum (Old 8x10, No Holdin' Back, and Heroes and Friends). To top off this success, Travis was showered with awards by the Academy of Country Music and the Country Music Association; he also won Peoples' Choice Awards in 1989 and 1990.

In 1991, Randy Travis and Lib Hatcher married in Hawaii after having been in a relationship for some years. They would divorce in 2010.

After the achievements of the late 1980s, Randy Travis's career took a slight downturn in the mid-1990s, with his 1993 album, Wind in the Wire, only reaching number 24 on the country charts. Subsequent albums, however, continued to place in the top 10. The 2000s saw Randy Travis shifting from country to gospel releasing five albums on the Christian record label Word Records. Of these, Rise and Shine (2003) reached number1 on Billboard's Christian Albums chart and won a Grammy. In 2008, after a nine-year hiatus, he returned to secular country music with the album Around the Bend.

Randy Travis is one of the most successful country musicians alive. He has won seven Grammies. His work has been repeatedly honored by the Country Music Association, the Academy of Country Music, and the Gospel Music Association's Dove Awards. He has stars in both the Hollywood Walk of Fame and in the Country Music Hall of Fame. In 2009, he was inducted into the North Carolina Music Hall of Fame. The Carolina Music Awards, which Randy Travis helped to found, issues the Randy Travis Award for the best country male musician each year. Travis made guest appearances in a number of television series and films, including Matlock, Touched by an Angel, The Rainmaker, and others. His music has been used as the soundtrack to a number of films.

The key to his success has a good deal to with his "neotraditionalist" musical style, which was unabashedly traditional at a time when country pop was the dominant style; his music resonated with audiences who loved the "traditional" country hits of the 1940s and 1950s. Travis was influenced by George Jones and Hank Williams Sr. and described the formative music he heard during his youth as: "Merle Haggard, Ernest Tubb, Tex Ritter, and Gene Autry. That's what I heard and what I love."

Did Randy perform at The Ritz

Did Randy perform at The Ritz Theater in Granville NY in the 80's?

You are sucha great singer...

You are sucha great singer....i love you