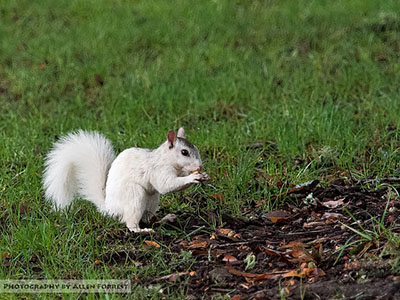 According to local legend, Brevard’s famed white squirrel population can trace their lineage back to a single pair of white squirrels that arrived in the town when a carnival animal truck overturned in 1949. The pair began breeding in the wild and would periodically appear throughout town.

The white squirrel population grew and, by 1986, became so prized to the community that the Brevard City Council created an ordinance establishing a white squirrel sanctuary, making it “unlawful for any person to hunt, kill, trap, or otherwise take any protected squirrels within the city.”

The Brevard white squirrels have dark eyes and white or grey streaked fir. They are not albino squirrels, as they have normal amounts of melanin and standard dark eyes. By 2011, an estimated 40.3% of Brevard’s squirrels were white squirrels.

I never have heard or seen a

I never have heard or seen a white squirrel before until this past weekend driving up to fancy gap, VA from Mt. Airy, NC crossing the road. Very interesting. I had to take a double look to really believe what my eyes were looking at.