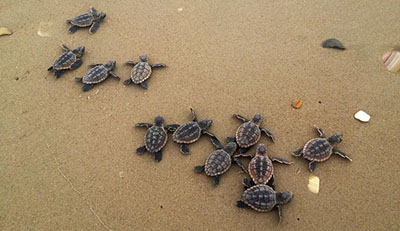 There are only seven species of sea turtles worldwide, and six are listed as threatened or endangered in the United States. Although the most common species in North Carolina is the loggerhead sea turtle, five sea turtle species regularly visit North Carolina waters: the loggerhead, Kemp’s ridley, leatherback, green and hawksbill. Only loggerhead, green and leatherback sea turtles lay their eggs on North Carolina beaches. Each species specializes according to its “ecological niche.” For instance, leatherbacks have long flippers to help travel great distances across oceans during feeding and reproductive migrations. Loggerheads have big heads and jaws to help them crush whelks and other mollusks that they feed on. Green turtles have a serrated beak to help them cut seagrass and algae, their principal food.

When in reproductive condition, female sea turtles will migrate to beaches in the same region where they were born. In the ocean waters close to nesting beaches, females mate with one or more males, and roughly one month later are ready to lay their eggs. Females nest several times in a single season, but will nest only every second or third year. Sea turtles generally emerge from the ocean at night to lay their eggs as a way to avoid daytime predators and the drying effect of the hot sun. Once on the beach, the female may take an hour or more to carefully dig her nest 18 inches deep in the sand. She will lay about 120 leathery eggs in this vase-shaped cavity, cover them with sand and then return to the ocean, leaving the eggs to incubate on the beach. Following approximately 60 days of incubation, the hatchlings will emerge from the nest and immediately scramble to the ocean where they remain for 15 to 30 years before they reach sexual maturity and are ready to mate. Although sea turtles can live to be over 50 years old, they have a very low survival rate. Only about one in 1,000 hatchlings will live to reproduce.

Many sea turtle populations worldwide are declining. The existing seven species face different dangers, both on nesting beaches and in the ocean. Some of the threats that turtles face in North Carolina include

• development and heavy traffic on beaches that can disrupt adults or destroy incubating eggs;

• indirect capture by fishing nets, which can lead to injury or death;

• beach renourishment activities that can uncover or compact sea turtle nests; and

Sea turtle conservation in North Carolina involves collaborative effort. The Commission works with many different organizations to help protect sea turtles and their nesting habitat. Commission biologists work with the U. S. Army Corps of Engineers to coordinate dredging efforts to prevent sea turtle nests from being destroyed. They also provide important information to public and private property owners along the coast about sea turtle conservation, which helps to minimize potential negative impacts to sea turtles. The Commission heads up a “Stranding and Salvage” network that responds to all cases of injured or sick turtles. A collaborative effort among the Commission, the North Carolina Aquariums, and the Karen Beasley Sea Turtle Rescue and Rehabilitation Center on Topsail Island ensures that dozens of turtles are rehabilitated and released back to the wild each year.

Commission biologists are also involved in research projects that will help benefit future management. In collaboration with the NCSU School of Veterinary Medicine and the National Marine Fisheries Service, Commission biologists currently are conducting a “Health Assessment” study that will characterize the physiological state of juvenile loggerhead sea turtles inhabiting our inshore waters. The information gained will be extremely useful in improving rehabilitation techniques and serve as a baseline for future studies. By working together, the Commission and other conservation organizations can effectively protect sea turtle nesting habitat along the North Carolina coast and conserve the sea turtle populations that nest on our beaches.

How you can help:

1. Use red filters on flashlights when walking on the beach at night.

2. Do not disturb nesting sea turtles.

3. Turn off all outside lights facing the beach front during the nesting season.

6. Dispose of trash in an appropriate manner.

7. Be careful when navigating watercraft to prevent turtle collisions and injuries.

10. Donate to the N.C. Nongame and Endangered Wildlife Fund.