Hoyt Wilhelm was a record-setting major league baseball relief pitcher elected to the Baseball Hall of Fame in 1985, the first relief pitcher so honored. He used his skill and perseverance to carve out an unlikely career and establish himself in the record books.

James Hoyt Wilhelm was born on July 26, 1922, in Huntersville, North Carolina. He was one of eleven children born to parents John and Ethel Stanley Wilhelm. Inspired by Washington Senators pitcher Emil “Dutch” Leonard, Wilhelm taught himself to throw a knuckleball. Gripping the ball with his fingertips rather than his knuckles, he was able to make pitches "float" toward home plate before taking an unpredictable curve just before reaching the batter. He used the pitch with good success playing for nearby Cornelius High School.

Wilhelm began his minor league career with Mooresville in the North Carolina State League in 1942. His career was interrupted by World War II when he was drafted into the army. Wilhelm rose to the rank of Staff Sergeant and was placed in charge of the regiment’s heavy machine guns at the Battle of the Bulge. He was awarded a Purple Heart after sustaining injuries when a shell exploded nearby. He received shrapnel wounds in his back and his right hand but recovered and was able to keep pitching.

Returning to Mooresville, he put together a record of 41-15 during the next two seasons and was drafted by the New York Giants in 1947 and placed in their farm league system. He rose slowly through the minor leagues, hampered by the fact that he threw a knuckleball rather than the typical fastball. Most knuckleball pitchers tended to use the slower pitch to put less stress on their arms toward the end of their careers. Wilhelm stood out because he relied heavily on the pitch, throwing it about 90% of the time. He was also known for tilting his head while pitching to compensate for a vision problem. While playing for the Jacksonville farm team, he met his future wife, Peggy Reeves, with whom he had three children: Patti, Pam, and Jim.

By the time Wilhelm was promoted to the New York Giants in 1952, he was believed to be 28 years old, an advanced age for a rookie. Records released after his death, however, showed that he was actually a year older than he had claimed. He was used as a relief pitcher rather than a starter, but he led the league in both winning percentage, with a 15-3 record, and earned run average (ERA), with 2.43. He finished second in that year’s Rookie of the Year voting. Wilhelm also hit a home run in his first at-bat, but this proved to be the only one in his 21-year career. 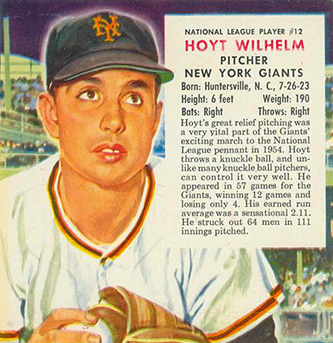 The reduced pressure on his arm from throwing a slower pitch allowed him to appear in more games than other pitchers, but the erratic break led to catchers frequently leading the league in passed balls. Although Wilhelm recorded 15 saves in 1953, he did not see action in the game when he was voted to his first All-Star team that year due to concerns about the catchers’ ability to handle his pitches.

In 1954, Wilhelm had a 12-4 record, and his pitching helped the Giants sweep the Cleveland Indians to win the World Series. He was traded to the St. Louis Cardinals in 1957 but placed on waivers later that year, allowing the Cleveland Indians to sign him. When they waived Wilhelm the following year, the Baltimore Orioles signed him and used him a starting pitcher to reduce passed balls in later innings. Orioles manager Paul Richards also designed an oversized catcher’s glove to help control the ball. On September 20, 1958, Wilhelm became one of only five pitchers to throw a complete game no-hitter against the New York Yankees. In 1959, he pitched a career-high 226 innings and led the league in ERA with 2.19. He made the All-Star team again, pitching an inning in the second game to help the American League win the contest.

To accommodate the Orioles’ young pitching staff, Wilhelm was moved back to a reliever role in 1960. He recorded 7 saves and increased the number to 18 the following year. He was named to the All-Star team but was charged with the loss in the first game and did not pitch in the second. He had a 7-10 record in 1962 but recorded 15 saves and an ERA of 1.94. This earned him another All-Star selection, although he did not pitch in either game.

In January 1963, Wilhelm was traded to the Chicago White Sox. He recorded at least 20 saves in each of his first three years with Chicago. From 1964 on, he was used exclusively as a relief pitcher. He had five consecutive years with an ERA under 2.00 from 1964 to 1968, including a career-best 1.31 in 1967. When new teams were added to the league in 1968, he was signed by the Kansas City Royals in the expansion draft, who quickly traded him to the California Angels. He was then traded to the Atlanta Braves in September. He saw action in 8 games, going 2-0 with 4 saves and a 0.73 ERA to help clinch the National League West title. 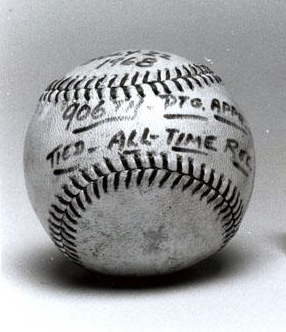 In 1970, Wilhelm pitched in 50 games for Atlanta and was selected to his final All-Star team. That September, he was released on waivers and signed by the Chicago Cubs. He pitched only 3 2/3 innings before being traded back to the Braves in November. The Braves used him for 2 1/3 innings in 1971 before releasing him. Wilhelm next pitched in 8 games for the minor league Spokane Indians before being picked up by the Los Angeles Dodgers, with whom he recorded his final four saves before his release in July 1972 and subsequent retirement. He later worked in the minor leagues for the Braves, as manager of their Greenwood and Kingsport farm teams, and the Yankees, for whom he worked as a pitching coach.

Wilhelm retired with a career record on 143-122 and 227 saves. He also amassed 1610 strikeouts over his 21 seasons. At the time, his 1,070 games pitched was a major league record, and it remains one of the highest totals to this day. He also set records for the most wins as a relief pitcher and the most innings pitched in relief. His career ERA of 2.52 was one of the lowest in history, and he was the first pitcher to win the ERA title in both the National and American Leagues, in 1952 and 1959, respectively. He is also credited with helping to popularize the knuckleball and gain more recognition for the role of relief pitchers.

Wilhelm’s long career is often credited to the reduced stress on his arm from working in relief and throwing a knuckleball consistently. Nicknamed “Ol’ Sarge” as a reference to both his age and Army service, he avoided most interviews and did not like discussing his age. He retired to Sarasota, Florida. He first appeared on the Hall of Fame ballot in 1978 and was elected in 1985 with votes on 83.8% of ballots. He was the first relief pitcher elected to the Hall of Fame, paving the way for others. Wilhelm died of heart failure at age 80 on August 23, 2002, after which it was learned that he was a full year older than anybody had believed.