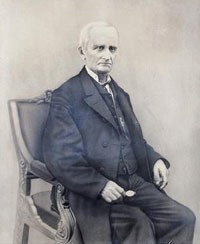 Jonathan Worth (1802-1869) found his Quaker upbringing and temperament tested by the trials of Reconstruction. The first of Dr. David and Eunice Gardner Worth’s twelve children, Jonathan Worth was born on November 18, 1802, at Center in Randolph County. He received a basic education in local schools and at the Greensborough Male Academy. Worth learned law as a student of Archibald D. Murphey and received his license in December 1824. He moved to Asheboro to establish his practice. Jonathan Worth married Martitia Daniel, niece of Murphey, in 1824; they had eight children, six of whom survived their father.

Worth possessed an inhibited personality and found public speaking distasteful and laborious; consequently, his early law practice floundered. He was more successful in business, investing in early textile mills as well as navigation and plank road companies. Believing that politics might help him overcome his professional handicaps, he entered the race for the state House in 1830 and was elected. There he voted against resolutions endorsing the administration of President Andrew Jackson yet spoke out strongly against the concept of nullification. Ostracized for standing on his principles, he returned to his law practice and prospered.

During the 1830s, Worth became a devoted member of the Whig Party, viewing Democratic doctrine as subversive to good government based on the federal Constitution. He spent three terms in the state Senate between 1840 and 1861 denouncing the Democratic policies. Twice he ran for Congress but was defeated. Worth bitterly opposed secession and refused to be a delegate to the May 1861 convention that took North Carolina out of the Union. He detested war or any form of violence owing to his Quaker heritage but, faced with the inevitable, chose to support his state.

Jonathan Worth frequently disagreed with the Confederate administration but, despite his hatred of war, never became associated with peace movements. He supported the Conservative Party in 1862 and was elected state treasurer on December 3. At the close of the war he was asked by Governor William W. Holden to continue in that office as part of the provisional government. He resigned on November 15, 1865, to run against Holden for governor in the general election called by the convention that met earlier in the year. A combination of Worth’s popularity and Holden’s lack of it led to Worth’s victory by nearly 6,000 votes.

The new governor faced major obstacles: quarreling factions within the state that needed to be reconciled; a president in Washington whose skepticism of North Carolina’s sincerity had to be assuaged; and a hostile Congress demanding satisfaction from increasingly stringent rules and regulations. Worth enjoyed moderate success in the first two, but the last proved intractable. He had barely taken the oath of office for his second term when Congress passed the first of the Reconstruction Acts that imposed military rule upon the South. The governor developed a good relationship with Gen. Daniel E. Sickles, who had charge of the Second Military District. Sickles frequently asked for and followed Worth’s advice; he was replaced by Gen. Edwin R. S. Canby in August 1867 and the situation changed. Worth found himself working simultaneously to restore North Carolina to the Union while trying to fend off military encroachments upon civil authority. With new elections ordered for 1868, Worth refused to run against Holden, now a Republican, who was certain to win. A military order directed Worth to turn over the governor’s office to Holden on July 2. In failing health, he retired to his home, “Sharon,” in Raleigh where he died fourteen months later on September 5, 1869. He was buried in Oakwood Cemetery.