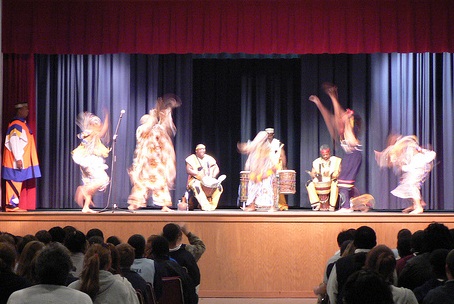 The African American Dance Ensemble, founded in Durham in 1984 by Raleigh native Chuck Davis, seeks to preserve and promote traditional African and American dance and music while entertaining and educating its audiences. A pioneer in the African heritage movement and internationally acclaimed as a dancer and choreographer, Davis was the artistic director of the New York City-based Chuck Davis Dance Company when he received an invitation from Charles Reinhardt, director of the American Dance Festival (ADF), to return to North Carolina in 1980 to be on the ADF faculty and to lead its Community Outreach Program. Davis brought along his New York dancers and decided to stay. Within four years the African American Dance Ensemble (AADE), by then made up largely of dancers trained in North Carolina, had emerged to become a mainstay of the state's dance community.

In addition to its mission of preserving African dance heritage, the AADE promotes cross-cultural understanding and respect for all peoples, carrying this message to audiences across North Carolina and the United States and abroad. The AADE has an impressive record for concert work and activities in schools and communities far beyond the borders of the state. Its repertoire includes traditional and contemporary African and American dance. Donald McKayle's Games was presented as part of the ADF's Black Tradition in American Modern Dance Project, which began in 1987. Davis and other choreographers create original, non-African pieces for the ensemble. In 1997 Ronald K. Brown choreographed Free, which the AADE premiered on a program with other works. The Lila Wallace Reader's Digest Program for Leading Dance Centers supported this endeavor as part of the ADF Dance and Community Project.