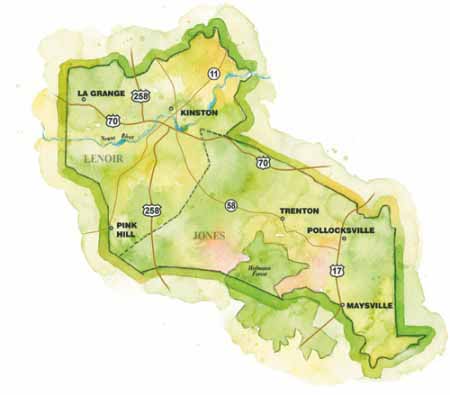 For at least a century, African American musicians from Kinston and the surrounding region have played key roles in the development of several forms of American music: jazz, rhythm and blues, funk, and gospel music. Jazz and R & B have been especially enriched by Kinstonians—from the early jazz composer and band leader J. Tim Brymn, the jazz guitarist Clifton “Skeeter” Best, and the alto saxophonist Talmadge “Tab” Smith, to Maceo and Melvin Parker, NatJones, Dick Knight, and Levi Raspberry, who became some of the founding fathers of funk in their work with the James Brown Band. Other artists have been drawn to Kinston and made it their home.

The soul and jazz artist Sedatrius Brown-Boxley, a Washington, D.C., native, lived and performed in Kinston for several years before relocating to Atlanta. Eva Narcissus Boyd-Harris, known to the world as Little Eva, was born in Belhaven, North Carolina, and spent the last quarter-centuryof her life in Kinston. She worked here as a waitress at Hanzies Grill, sang in her church, and occasionally reprised her number one hit song from 1962, “The Loco-Motion.”

Kinston in the early and mid-20th century attracted a steady stream of internationally known African American touring musicians. On the night of February 24, 1947, a Monday night, onlookers peering into Sheppard’s Tobacco Warehouse in Kinston would have seen people dancing to the music of Cab Calloway and his Cotton Club Orchestra. They would
have heard that big band sound shimmering out onto Bright and Herritage Streets, the world-famous voice singing above it—The jim, jam, jump is the solid jive, / Makes you nine foot tall when you’re four-foot-five—and the band responding, Hep hep!

Today, music is still at the heart of much of community life in the Kinston area. Although the days of dances in the tobacco warehouses have passed, visitors to the region have a growing array of opportunities to experience the African American musical heritage in Lenoir and Jones Counties. Trail events and sites can be found in Kinston, the Lenoir County seat, and the town of La Grange, about 10 miles west, between Kinston and Goldsboro, and in the Jones County communities of Trenton, Pollocksville, and Maysville.