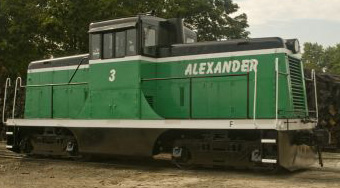 Alexander Railroad Company was organized by Alexander County business interests on 30 Nov. 1945 to operate an 18-mile Southern Railway branch line from Statesville to Taylorsville that was being abandoned. Constructed in 1887 as the Statesville & Western Railroad, the road had been acquired by the Richmond & Danville in 1894 as part of the new Southern Railway System. After the discovery of the precious gem hiddenite near Taylorsville, a local attorney named Limney exclaimed that there was such wealth "even a June bug could fly away with it." As a result, trains on the line came to be known as "June Bugs." The affectionate term remained in use, although hopes for great wealth were never quite realized.

Operations were resumed by the Alexander Railroad on 7 Feb. 1946 under the direction of L. P. Zachary and, later, his son Sam Zachary. Beginning with a locomotive rented from the Southern, the Alexander soon acquired a 45-ton General Electric diesel, no. 6, as its motive power. The Alexander became known to the general public by its conspicuous name on a bridge over Interstate 40 near Statesville.

By the early 2000s the Junebug Line was an 18-mile road headquartered in Taylorsville with connections to the Norfolk Southern Railroad in Statesville, serving businesses in Iredell and Alexander Counties. The railroad's four locomotives moved commodities such as grain, pulpboard, plastics, lumber, waste paper, fertilizer, and liquefied petroleum gas.