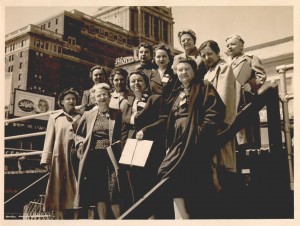 The North Carolina Chapter of the American Association of University Women (NCAAUW) was founded in 1927, 46 years after the national organization. It has maintained a strong presence at the state's colleges and universities. The organization's three main charges are to promote equity for females of all ages, to provide an outlet for lifelong education and self-development, and to provide a means for positive societal change. Anyone possessing at least a bachelor's degree from an accredited college or university is eligible for membership. Undergraduates enrolled in an accredited institute of higher learning may obtain student membership.

The first of North Carolina's 31 NCAAUW branches was formed in Chapel Hill in 1923 after the merger of the Southern Association of College Women and the Association of Collegiate Alumnae. Seventeen women met in the home of Mrs. Harry Woodburn Chase, the wife of the University of North Carolina president; Louise Venable, the daughter of former university president Francis Venable and future wife of botany professor William C. Coker, was elected to serve as the first chapter president.

At the University of North Carolina, the organization's efforts began with an initiative to locate a physical education instructor as well as provide a place for female students to exercise. As community involvement increased, the group later played a vital role in establishing the Chapel Hill Public Library, which opened its doors in 1958. Membership grew to include women from Durham, Orange, and Chatham Counties. The Carrie Heath Schwenning Scholarship Fund was formed to provide financial assistance for female graduate students at the university who display outstanding academic performance.

Nationally, the AAUW includes programs geared to offer services and support for females of all ages. The Educational Foundation provides funding for research, community projects, and grants. The Legal Advocacy Fund offers legal support to women faced with sexual discrimination cases in higher education. In 1953 the NCAAUW established the AAUW Award for Juvenile Literature. A plaque-on which the names of winners are engraved-was given to the North Carolina Literary and Historical Association, and a cup is presented to the annual winner who has published in book form "an original work of juvenile literature of outstanding excellence . . . most worthy of recognition." The competition, open to residents of North Carolina, is handled through the secretary of the North Carolina Literary and Historical Association.

In addition to its Chapel Hill chapter, the NCAAUW has chapters in university and college settings in Raleigh, Asheville, Brevard, Greensboro, Charlotte, Winston-Salem, Statesville, Wilmington, and other North Carolina cities.

"North Carolina delegation to the Biennial Convention of the AAUW, Atlantic Ciy, N.J., 22 April 1951." Courtesy of UNC Libraries. Available from http://www.lib.unc.edu/blogs/shc/index.php/2009/02/01/creator-of-the-month-guion-griffis-johnson/ (accessed May 10, 2012).