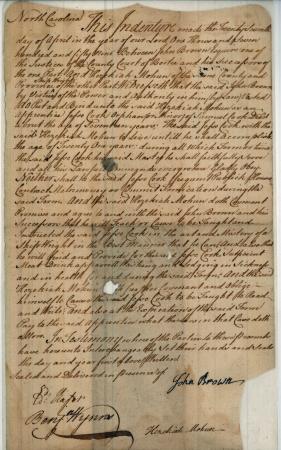 Apprenticeship, the system of binding a child to a master to learn a craft, trade, or occupation, has taken two forms in North Carolina. Compulsory apprenticeship was used from the last quarter of the seventeenth century into the beginning of the twentieth century. Voluntary apprenticeship has been in use from the earliest days to the present.

Compulsory apprenticeship had as its immediate objective the relief of indigent orphans, abandoned or illegitimate children, and the children of impoverished parents-the support and maintenance of whom would otherwise have fallen to the community. Its long-term objective was to train children in an occupation so that they could support themselves as adults. Such children, white or free black, male or female, were bound under court order to a master. The master stood in loco parentis and was entitled to the child's obedience and service, while being expected to offer moral instruction and paternal control. The courts sometimes removed apprentices from cruel masters. Boys were apprenticed to learn skilled crafts such as carpentry or farming, while girls were usually apprenticed to learn housekeeping or "feminine arts" such as weaving. In England only master craftsmen, certified by local guilds, had been able to take an apprentice, but in America-where trained artisans were fewer and social institutions were weaker-a more informal system evolved in which anyone could train apprentices. In North Carolina and the rest of the South, widespread use of indentured servants and slaves weakened the practice of apprenticeship, especially in rural areas.

With the end of slavery in 1865, the Freedmen's Bureau preempted the courts' power to apprentice indigent black children and orphans. From September 1865 to September 1867, the bureau apprenticed hundreds of these children ranging in age from infancy to late teens. Some were bound to learn skilled trades, many to learn farming and housekeeping, and a great number merely to serve as "apprentices or servants."

Although the system of compulsory apprenticeship lasted into the early 1900s, it was used less and less as the number of orphanages with their own agricultural, mechanical, industrial, and commercial training programs increased. The system was dropped altogether upon passage of the Child Welfare Act in 1919.

Voluntary apprenticeship in North Carolina was based on common law rather than statute law until the twentieth century. A father, white or free black, being entitled to the service and obedience of his child until age 21, was able to forge a binding agreement that his child should serve another for one or more years. The Apprenticeship Act of 1889 forbade voluntary apprenticing of children younger than 14 and set the term of their apprenticeship at three to five years. Since 1939 apprentices have been required to be 16 or older.

When slaves were apprenticed, the right of the slave owner to the services of his slave was absolute, and assent of the slave was unnecessary. Apprenticed slaves were generally made to learn skilled crafts that could not be learned on the plantation, such as shipbuilding, house carpentry, and coach making. Although slave craftsmen could not be masters of apprentices, they were sometimes the teachers from whom other African American apprentices learned.

Labor union policies, reluctance of employers to train apprentices who then sought employment elsewhere, and unfair wages and terms of apprenticeship led to the National Apprenticeship Act (or Fitzgerald Act) of 1937. In North Carolina provisions of the federal act were implemented in the 1939 Voluntary Apprenticeship Act, which provided for the creation of apprenticeship committees to work with school authorities, employers, and employees in setting up local programs. Agreements were to be signed by the apprentice (and, if a minor, by his or her father) and the employer, and to become effective only after review by the director of apprenticeship.

By the twentieth century's end, only those occupations that remained essentially on a handicraft basis (such as machining and the building trades) or those industries where production varies from unit to unit (such as printing, tool and die making, and molding work) needed apprentices. North Carolina's modern apprenticeship program, coordinated under the Department of Labor, is supported by cooperating industries and businesses, labor unions, technical institutes, and high schools.

W. J. Rorabaugh, The Craft Apprentice from Franklin to the Machine Age in America (1985).

I had a third great

I had a third great grandfather who was an orphan. His father had died in 1772 and his mother remarried in 1775.

At the October 1777 session of Mecklenburg County court of Pleas and Quarter Sessions (CR065.301.1) page117 Phillip Hagler was bound to his brother (actually half brother) Jacob Hagler until he arrives at the age of 21 being ten years and six months old to learn the Blacksmith trade and at the expiration of his apprenticeship the said Jacob Hagler promised to give him Ten Pounds currency exclusive of the Provision made by an act of Assembly in that case.

I`d love to know what the Provision was that was made by an act of Assembly in that sort of case and the source information.

I`m handicapped to the extent I can no longer go down to the Archives and on my own research for the answer.

I found the following

I found the following statement in a Chancery Suit in Patrick County, VA.
"That at the death of the said John Bowman, his children were all small, and some of them had to be bound out by the authorities of the poor in North Carolina, and there was no one to look after their interests in their father's land over in Virginia, and it is only since these children have become of age it is being inquired into."
One of the Bowman children was my grandfather, and I would love to see the records of his being "bound out". The family were most likely in Stokes County, NC when John Bowman died about 1884.
Was a court involved in the binding out of the orphans, and if so, How can I access the court records of the process?
Eager to lear more, Byron Bowman