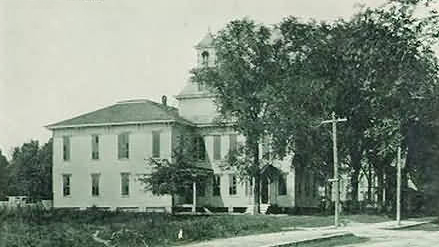 In 1878 Samuel Lloyd Sheep, a Pennsylvanian who had recently arrived in Elizabeth City, opened the Elizabeth City Academy. The history of the academy in its earliest years is unknown, but records show that the building was used during the Civil War to house Federal troops and was later torn down and destroyed. Under Sheep, the school operated successfully for 16 years. In 1894 the school's name was changed to Atlantic Collegiate Institute, and its curriculum was expanded to include primary, preparatory, and collegiate departments (the latter to prepare students to enter colleges with advanced standing). Among its students were two who would distinguish themselves in North Carolina politics: John C. B. Ehringhaus, governor from 1933 to 1937, and Robert Bruce Etheridge, state legislator for 11 terms between 1903 and 1959 and director of the North Carolina Department of Conservation and Development from 1933 to 1949.

In 1907 Elizabeth City took over the institute and converted it into a public school. Sheep remained superintendent for 20 years, except for a four-year interval (1914-18) during which he was superintendent of schools in Helena, Ark. In 1940 the Elizabeth City Board of Education named the school after Sheep, who had devoted nearly 50 years of his life to the education of the youth of Elizabeth City and the Albemarle section of North Carolina.