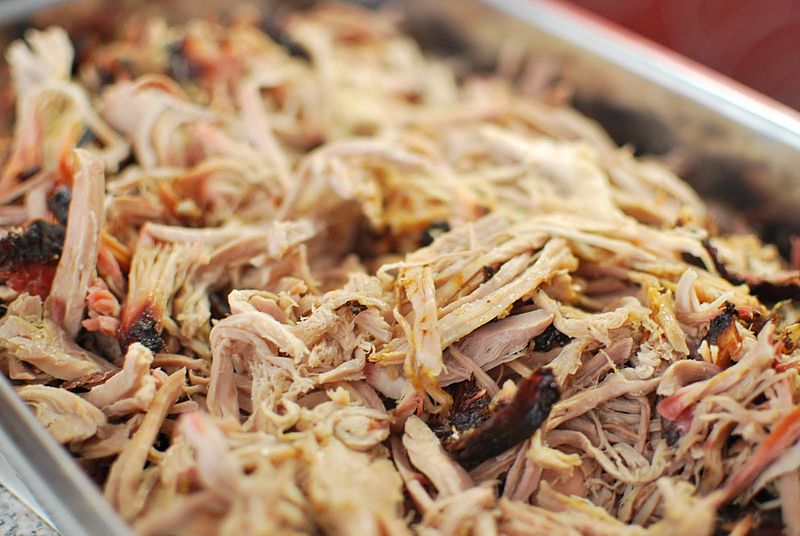 Barbecue is the best-known and the most-celebrated food enjoyed by North Carolinians.  While there is a strong debate over regional variations, pork smoked slowly over hardwood coals and seasoned with a vinegar-based sauce is enjoyed from one end of the state to the other, and the style of “North Carolina barbecue” is appreciated far beyond our borders.

North Carolina barbecue is cooked very slowly -- often as long as overnight -- over pieces of hardwood that have been burned down to coals.  Oak and hickory are among the most frequently used woods.  As the pork cooks, it is often seasoned with a vinegar-based sauce.  The simplest version of the sauce contains only white vinegar, red pepper, and salt, though there are many variations.  The sauce is also served at the table as a condiment.  Once cooked, barbecue is either chopped, pulled, or sliced.  Many restaurants offer a choice to their customers.  At social gatherings known as “pig pickings,” the meat is pulled or “picked” directly off of the cooked pig.

North Carolinians will typically find two options available for eating barbecue: on a sandwich, or as part of a plate.  The sandwich is simply the cooked meat on a plain hamburger bun, sometimes topped with cole slaw.  The composition of barbecue plates vary from one restaurant to the next, but always include barbecue served with a few traditional side dishes, such as cole slaw, hush puppies, and brunswick stew.

The method of cooking whole hogs over coals was most likely adopted from Native American cooking techniques.  This method proved effective at producing large quantities of delicious and relatively inexpensive food, making barbecue a standby for large gatherings.  By the late 19th century, barbecue had become a staple at North Carolina political rallies, and remains so today.

The first barbecue stands and restaurants began to appear in the state in the early 20th century.  In 1919, a barbecue stand (actually, a tent) opened near the courthouse in Lexington, and a few years later in Rocky Mount, barbecue pioneer Bob Melton opened the state’s first sit-down barbecue restaurant.

In North Carolina, “barbecue” is a noun.  It refers primarily to the food (as in “I’m fixin’ to have some barbecue”) but also to events at which barbecue is served (“Are y’all goin’ to the barbecue?”).  It is never used by native Tar Heels to describe the act of cooking barbecue, or the device on which it is cooked.

The origins of the word itself are subject to much debate.  A popular suggestion is that it derives from the French words “barbe” (beard) and “queue” (tail) which were adapted due to the fact that the whole hog, “from beard to tail”, was cooked.  Linguists disagree with this theory.  The Oxford English Dictionary calls it an “an absurd conjecture” and traces the word back to 17th and 18th century Spanish and French words adapted from native inhabitants of Central and South America.

In the late 19th and early 20th centuries, a slightly different style of barbecue emerged in the Piedmont region of North Carolina.  Rather than using the whole hog, people in the area frequently cooked only pork shoulders.  And, to the continuing dismay of barbecue traditionalists in eastern North Carolina, Piedmont barbecue restaurants regularly add tomatoes -- usually in the form of ketchup -- to their sauce.  Authors John Shelton Reed and Dale Volberg Reed attribute the introduction of tomatoes to German settlers in the Piedmont who were trying the replicate the sweet and sour flavors in the sauces they were familiar with.  This style of cooking is often referred to as “Western” or “Lexington-style” barbecue.

There is not a clear dividing line between the Eastern and Western styles of barbecue, but there are established centers for each.  North Carolinians can be certain of finding traditional Eastern barbecue in restaurants in Rocky Mount, Wilson, and Goldsboro, while those who prefer a little tomato in their sauce can look to Greensboro and, especially, Lexington.  The great barbecue divide has been a source of good-natured arguments between North Carolinians for decades, with local newspaper columnists usually leading the debates.

North Carolina barbecue is starting to go upscale.  Following the lead of other traditional, homespun dishes like gumbo and shrimp and grits, barbecue is beginning to appear on the menu of some of the state’s fine-dining establishments.  And even some restaurants devoted to barbecue are paying more attention to their surroundings and presentation. In one of the most notable examples, legendary barbecue cook Ed Mitchell, from Wilson, has brought traditional barbecue into a contemporary setting at “The Pit,” a popular restaurant in downtown Raleigh.

While longtime North Carolinians might raise an eyebrow at the presentation (and especially the price) of barbecue in contemporary restaurants, that is not the biggest threat to the state’s barbecue tradition.  Some barbecue restaurants, bowing to modern cooking techniques, prepare their pork in gas or electric ovens, rather than over wood coals, leading many to question whether the resulting product should even be called barbecue.

Although it’s been over 250 years since William Byrd wrote of the pork-eating prowess of North Carolinians, barbecue remains as popular as ever in the state.  Many of the families who opened the state’s first sit-down restaurants in the 1910s and 1920s are still in business.  North Carolina barbecue is regularly featured (and praised) in national publications and television shows, and the North Carolina Barbecue Festival, held annually in Lexington, attracts over 100,000 visitors each year.