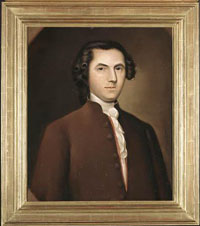 The loose structure of government institutions in colonial North Carolina at times resulted in lapses of decorum that appear outrageous and humorous from a modern perspective. An early example of the sometimes coarse behavior of the colony's leaders was that of several members of the North Carolina Council during the Tuscarora Indian War (1711-13).

John Barnwell, an ally from South Carolina who was bringing troops to assist his northern neighbor, arrived in the colony in April 1712. Soon after his arrival he reported to the council, then in session in Perquimans Precinct (a section of the original County of Albemarle). To celebrate the occasion two or three members provided alcohol-laden punch. Present were Governor Edward Hyde, Councilman Thomas Boyd, and the Reverend John Urmston, an Anglican missionary. After drinking the potent punch for an extended time, the council voted on resolutions and addresses of thanks, then soon "strip'd naked & boxt it fairly two & two, all the same day." Paired off were Hyde and Boyd, Urmston and Hyde (who was also Speaker of the Council), and the provost marshal with another assemblyman. Neither the outcome of the matches nor the visiting Barnwell's reaction to them are known, although it can be surmised that little official business was attended to after the boxing had begun.