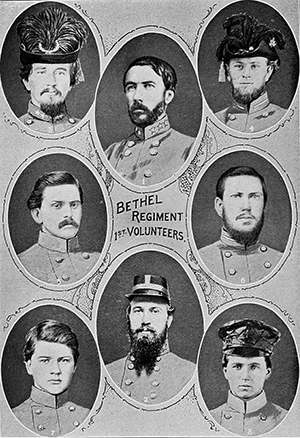 Bethel Regiment was the popular name of the first regiment of volunteers raised in North Carolina at the beginning of the Civil War. Commanded by Col. Daniel Harvey Hill, it played a significant role in winning the first land battle of the conflict at Bethel, Va., on 10 June 1861. The first Confederate soldier from the state to be killed in action, Henry Lawson Wyatt, died there.

Edward J. Hale, "The 'Bethel Regiment': The First North Carolina Volunteers," in Walter Clark, ed., Histories of the Several Regiments and Battalions from North Carolina in the Great War, 1861-1865, vol. 1 (1901).

"15 August 1861: 'Gen Magruder…carried about 7 or 8 thousand soldiers the other day from this place…down to Hampton and burned the entire place…'." The Civil War Day by Day (blog). Louis Wilson Round Special Collections Library, University of North Carolina at Chapel Hill. http://www.lib.unc.edu/blogs/civilwar/index.php/2011/08/15/15-august-1861gen-magruder-carried-about-7-or-8-thousand-soldiers-the-other-day-from-this-place-down-to-hampton-and-burned-the-entire-place/ (accessed November 9, 2012).