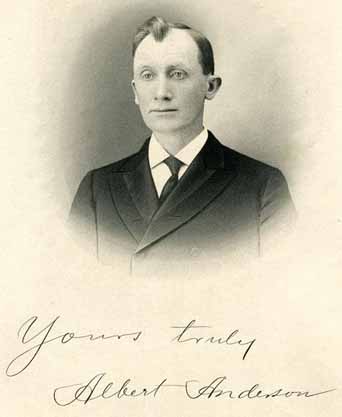 Albert Anderson, physician and superintendent of the state mental hospital at Raleigh, was born near Eagle Rock. His father, Jesse Anderson, worked a small farm during the difficult times of Reconstruction, and young Anderson witnessed the destructive march of Sherman's army through the Eagle Rock area. His mother was Mary Tucker. Anderson attended local schools a few months each year with his younger brothers, "stopping off for foddering time" and other farm chores as the occasion demanded. Subsequently, he attended the Raleigh Male Academy and at the age of nineteen entered Trinity College, doing odd jobs to help cover costs; he was graduated in 1883 with an M.A. degree. From 1883 to 1887 he was an instructor at and the principal of the small Middleburg Male Academy in Vance County, of which he is said to have been the founder. While at Middleburg an interest in the sciences led him to the study of medicine under private instruction, probably with a doctor attached to the Middleburg medical school, which was reputed to be the first in the state. Anderson then attended the University of Virginia for one year, passing his finals there in 1888 and, soon after, the examination of the North Carolina State Board of Medical Examiners.

He immediately began a general practice in Wilson, taking time off as the opportunity arose to do postgraduate work at New York Polyclinic and other medical schools in the North. In 1892 the state board of health selected him as one of two North Carolinians to attend special courses offered to boards of health by the U.S. government. Six years later he was appointed a member of the state board of medical examiners.

Anderson was described as tall and slightly stout, well built, clean shaven, conservatively dressed, and almost clerical in appearance, yet a charming conversationalist. He was an excellent speaker, always logical and convincing, and addressed many medical gatherings. His persuasiveness was a chief factor in his ability to organize others. In 1898 he and Dr. E. C. Moore were responsible for the construction of a first-class hospital at Wilson, one of the best in that area of North Carolina. He was the chief supporter of a plan to make the county medical society a basic unit of government, an enterprise that required prospective members of the state society to enroll in their home county units; he himself was made councilor for an eight-county unit of the Wilson area. 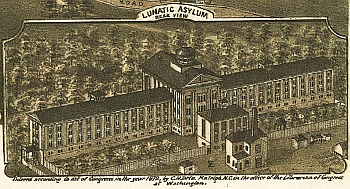 Probably in recognition of his ability to combine medicine with business, the Jefferson Standard Life Insurance Company of Raleigh made him its medical director in 1907, a position he held for five years until the company moved to Greensboro. In 1913, Governor Locke Craig appointed Anderson superintendent of the state hospital for the mentally ill. It stood on Dix Hill, named for Dorothea Dix, pioneer in the care of the emotionally disturbed. Anderson was without training or substantial experience in mental health, but he immediately set himself to transform the "asylum" into a modern hospital; his approach included "remolding the attitude of hospital personnel toward the so-called insane." He expanded the premises and instituted a training school for nurses, so that they could better deal with "that part of the public which still retained crude ideas of the nature of mental illness." In an age before the general use of tranquilizers, he stressed occupational therapy for those able to accept it. Through his efforts, the mental hygiene exhibit, sponsored by the National Committee on Mental Hygiene, was held in Raleigh for three years.

During the years following his start at Wilson, Anderson held many positions. He was president of the Seaboard Medical Society and the Tri-State Medical Society, as well as a delegate to meetings of the American Medical Association. He was a director of the Raleigh branch of the North Carolina Bank and Trust Company and a trustee on the board of directors at Duke University. He was a charter member of the Junior Order of United American Mechanics and a member of the Tar Heel and Watauga clubs. A member of the Jenkins Memorial Methodist Church, he taught Sunday school for some years. On 12 Dec. 1888 he married Pattie Rountree Woodard, a sister of Mrs. Charles B. Aycock, wife of the governor. There were no children.