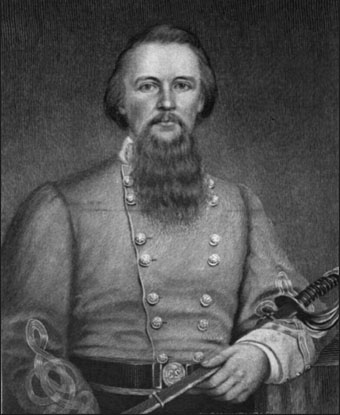 George Burgwyn Anderson, Confederate soldier, was born near Hillsborough of Scotch-Irish ancestry. His father was William E. Anderson; his mother, Eliza Burgwyn. At an early age, Anderson demonstrated marked intellectual abilities that enabled him to enter The University of North Carolina at age sixteen. After one year there, he received an appointment to West Point, where he was graduated in 1852, standing ninth in a class of forty-one. Anderson was appointed brevet second lieutenant in the Second Dragoons and, following a brief tour in California, joined the regiment at Fort Chadbourne, Tex. Promoted to first lieutenant on 13 Dec. 1855, he served as regimental adjutant for over a year. With the regiment, Anderson witnessed the civil strife and violence engulfing Kansas during this period and marched under Albert Sidney Johnston to settle the Mormon problems in Utah. In the fall of 1859 he was detached on recruiting duties to Louisville, Ky. He remained on this duty until the firing on Fort Sumter, when he tendered his resignation (25 Apr. 1861) to offer his services to his native state.

Within a month, Anderson was appointed colonel of the Fourth North Carolina Volunteers. Organizing, equipping, and training the recruits occupied Anderson for two months. At the end of July, the regiment moved to Manassas Junction, Va., where Anderson assumed command of the post until the spring of 1862, when the Confederate army withdrew to the Peninsula. Anderson's first real action came at Seven Pines or Fair Oaks on 31 May. Temporarily commanding a brigade in D. H. Hill's division, he led a charge down the Williamsburg road. The attack stalled until Anderson, seizing the flag of the Twenty-seventh Georgia, personally led the brigade in the capture of Federal breastworks. His display of courage and leadership prompted President Jefferson Davis to promote him on 9 June to brigadier general.

Anderson assumed command of four North Carolina regiments, Second, Fourth, Fourteenth, and Thirtieth, a brigade whose combat record would be equalled by few others. In the Seven Days, he commanded the brigade with skill and conspicuousness, being wounded in the hand at Malvern Hill. His next battle was at South Mountain, Md., where Hill's division alone stubbornly resisted the Federal attacks for a full day on 14 Sept. Three days later, Anderson's brigade held the right of the Confederate line in the bloody lane at the Battle of Sharpsburg. The Confederate soldiers repulsed three concerted Federal attacks, until a mistake in orders caused one brigade to withdraw, resulting in a collapse of the line. Anderson, while standing on a knoll rallying his men, was hit in the ankle by a minie ball. Though the wound was painful, it was not considered serious, and Anderson was sent home to Raleigh to recover. The wound failed to heal, however; an amputation was performed, but he never fully responded and died on 16 Oct. He was buried with full military ceremony in Oakwood Cemetery at Raleigh.

Anderson married Mildred Ewing, 8 Nov. 1859; they were the parents of two children, one of whom, George, B., Jr., lived to adulthood.

George B. Anderson Bio-Sketch, Sons of the Confederate Veterans: http://www.ncscv.org/george-burgwyn-anderson