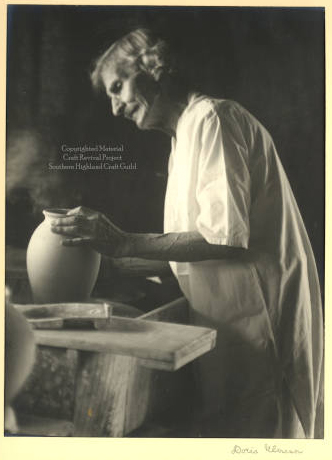 Oscar Louis Bachelder, master potter, was born in Menasha, Wisconsin, the son of Hannah Tipley Bodwell (or Bothwell) and Calvin B. Bachelder. He came from many generations of potters on

both sides, and his father worked in the noted potteries at Bennington, Vt. Bachelder moved from Wisconsin to North Carolina in 1911 and established the Omar Khayyám Pottery at Luther, west of Asheville. Initially, he made such practical pieces as jugs, churns, and crocks, but later he switched to artistically designed work, explaining: "I wanted to create beauty unmarred by the hand of commerce." An advertising card that he distributed asserted: "Each article has merit and individuality. No replicas. O. L. Bachelder, artist."

In 1919 he won the Logan Prize awarded by the Chicago Art Institute, where his pottery was displayed. Bachelder's work was also exhibited in New York, Philadelphia, Boston, Detroit, Buffalo, and Paris.

Called "a dreamer, philosopher, artist, and lover of nature," Bachelder died in 1935 at the age of eighty-two, survived by his widow, Mrs. Pink Bachelder.