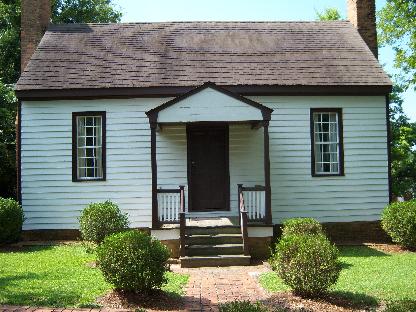 Patrick Boggan, Regulator and revolutionary patriot, was born at Castle Finn, County Donegal, Ireland, according to tradition. He was the son of Sir Walter Boggan. He was probably in his early twenties when he came to America with his two brothers, Benjamin and James, and a sister, Jane. They appear to have settled first in Maryland, later removing to Virginia, and all finally settling in Anson County. Jane Boggan married Thomas Wade, probably in 1743. Patrick Boggan is first recorded as living in North Carolina when he received a grant for 238 acres of land in Granville County from Lord Granville in 1752. In his deed he was described as "planter," and he signed the document himself.

By the time of his children's marriages, Boggan was a large landowner in Anson County, and he gave land and slaves to each of them. Much of his property is still owned by descendants. He also made generous gifts of land to his brother-in-law, Colonel Thomas Wade.

Boggan's name appears in 1768 on a petition to Governor William Tryon from residents of Anson County, complaining about their treatment at the hands of local officials. This affiliation clearly identifies him as a member of the group that came to be known as Regulators.

During the Revolution, Boggan was a captain of militia serving under his brother-in-law, Colonel Thomas Wade. He engaged in several raids against local Tories, sometimes in collaboration with partisan leaders from South Carolina.

The courthouse of Anson County had been located near the South Carolina line when the county was established in 1750, but after the creation of two new counties in the northern and eastern parts of Anson in 1779, agitation began for a more conveniently located county seat. In 1782, Boggan purchased seventy acres of land and donated it for a town to serve that purpose, which soon came to be called simply New Town. At the death of Colonel Wade in 1786, the name Wadesboro was adopted. In 1795, Boggan served the county as one of its justices.

Boggan's will is dated 1801, with a codicil added in 1803, but it was not probated until 1817, the presumed year of his death. At that time he owned more than a thousand acres of land. His last years, following the death of his wife, were spent with his daughter, Eleanor Hammond, in a house in Wadesboro that he had built for her at the time of her marriage. This house is still standing and is the oldest house in Wadesboro.

Patrick was my grandfather, 4

Patrick was my grandfather, 4 times removed, through Lydia and Moses Coppedge. I visited Castle Finn, Ireland, in June 2015. There are still 13 Bogan brothers and sisters living in that area. Most Bogans left a long time ago. There is a Bally Bogan or Bogan Town and a Bogan grave yard. They came from Cornwall, I assume under the plantation system. They were protestants, but have converted to Roman Catholic.

Apparently, my 6th gr-grandfather served under Mr. Boggan in the Revolutionary War. I am trying to determine on a map where exactly 'Boggans Branch/Jones Creek' might be located? A snippet from my ancestor's land grant reveals the following...

"Beg. at two Spanish Oaks and one hickory standing on the head of Boggans branch Jones Creek..."

I can point you to a number of resources, for starters, that might help with this question.

I will also forward this information to you via email.  If you need additional help, please feel free to post back here.

There seems to be confusing

There seems to be confusing about the person who was pecked on the head by a turkey, which became infected and caused his death. This was Judge Spencer and not Patrick Boggan. (Wadesboro Historical Society)

Thank you Betty for this

Thank you Betty for this update. The Boggan's as I knew them were prone to exaggeration and could screw up a story as you have now pointed out.

You can read more details of

You can read more details of the turkey-related death of Judge Samuel Spencer in his biography on our site.

I have heard these names from

I have heard these names from my childhood. Patrick Boggan was redheaded and his brother was mousy brown. Patrick was purported to have been able to leap a hay wagon full of hay. I was told that when he became very old he had a pet turkey and that while he slept in his rocker on the front porch the turkey seeing his jugular vein pounding, pecked it and Patrick Boggan bled to death. I heard they came from Ireland and that there is a caste there by our name Boggan Castle. I also heard they originally came from Holland. My Father was Kenneth Clarence Boggan, one of 9 children. His father's name was Troy Pet Boggan. Troy Pet Boggan worked on the railroad and that is how he met my grandmother as he worked his way near where she resided. Her name was Lillie Mae Story. They all resided in Arkansas. I heard that he was a somebody during the revolutionary war, but most details of this account are blurred by time.