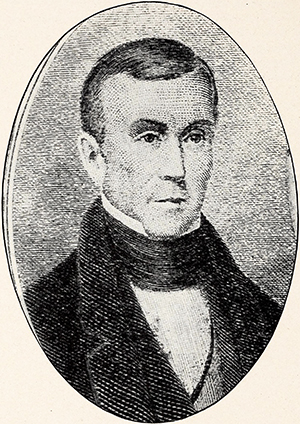 Ratliff Boon, representative from Indiana, was born in Franklin County. Boon moved with his parents to Warren County, Ky., attended public schools, and then moved to Danville, Ky., where he learned the gunsmith's trade. He married Deliah Anderson and with his father-in-law went to Indiana in 1807 or 1809. He bought land about two miles west of what is now the city of Boonsville, which was named for him when it was made the seat of Warrick County, Ind., in 1818. Boon lived on a farm three miles west of Boonsville until 1836, rearing a family of five boys and five girls. In 1836 he moved to Boonsville.

Boon was appointed the first treasurer of Warrick County upon its organization in 1813. In 1816 he became his county's first representative, serving in the first and second assemblies. In the third assembly, in 1818, he was a senator. Before his term as senator expired, he was elected lieutenant governor of Indiana. Before his second term as lieutenant governor expired, he had been elected to the Nineteenth Congress as a Jacksonian Democrat. Upon the resignation of Governor Jonathan Jennings Boon became, for a brief term (12 Sept.–5 Dec. 1822), the second governor of Indiana. He was again elected lieutenant governor in August 1822 and served until 30 Jan. 1824, when he resigned to become a candidate for the Twentieth Congress.

In 1826, Boon ran for election as U.S. senator to the Twentieth Congress but was defeated by O. H. Smith. He was, however, elected to the Twenty-first Congress and to the four succeeding congresses (4 Mar. 1829–3 Mar. 1839). At the time of his defeat, he retired from Congress and moved from Indiana to Pike County, Mo. Here he became a vehement and unsuccessful opponent of Thomas H. Benton, a dominant figure in Missouri politics at the time. Boon died at his home in Louisiana, Mo., and interment followed in the Riverview Cemetery there.

Boon was a typical pioneer in the early days of Indiana. He had little education but was a man of strong common sense. He held a long list of political offices over twenty-six years. During his time in Indiana, he helped organize the Jacksonian Democratic party, and during his official career he was its outspoken champion. He stood stoutly for the rights of the common people, even in the face of the eloquence of Clay and Calhoun. Little can be said of Boon's career in politics; he was entirely outclassed in Congress. When not in political office, he worked on his farm and kept up his political contacts.